LCCC at the US Open! 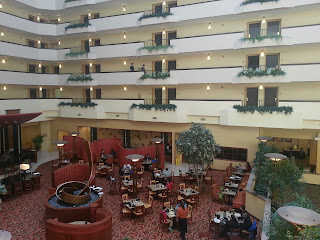 Thanks to pkinnicutt, Renny54, Mr. Eagle, malurn, jethro07, sheet of paper, and my son who gave me a nice send off with a little training session and beer at Buffalo Wild Wings.

Mikeniks (chess. Com name) – your humble scribe - arrived at the US Open around on day two of the tourney. It was a rainy and chilly ride. The heat was even on in the car for part of the seven hour journey.

Given a choice between a 2nd or 7th floor king size room, the 2nd floor was selected as to avoid the elevator – and get a smidgeon of exercise. After today already I see it will be a lot of exercise – and that is a good thing.

The results from the 1st round were posted from those that played in the nine day event. It looked like the standard GM thru A-player beating the B thru unrated player first round. I’ll report the standings in greater detail after round 6. 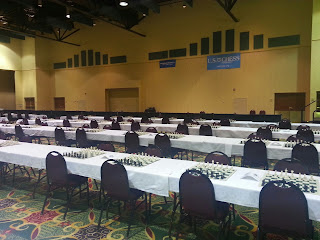 There appears to be about 20 players from of the 600+ entered so far.

I did get a look at the playing hall (named “” by the way). It is an eerie calm – right before the, well, eerie calm of a chess tournament.

There were games getting started shortly however, as there are quite a few side events: Weekend Swiss, Bughouse tourney, US Open Scholastic, US 15/G Championship, US Open Blitz, NIT Girls Championship, and daily Quad events. 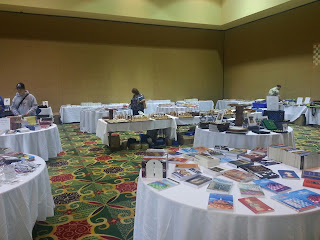 Made the stop at the Chess Store and saw a beautiful Walnut and Maple board ($125) – marked down to $49 due to a few minor dents on the surface. I thought it was quite a steal and made a note to pick it up after I perused the rest of the boards and books. Not 10 minutes later I went to pick it up – and it was gone! As I said, it was a bargain and I hope it found a good home.

So I opted for a Walnut and Maple folding board – similar to the one Paul Covington had brought to LCCC on his visit. It was more money of course – but after all - it’s VACATION!

Speaking of Paul, I shook hands with him during his round. Obviously we could not talk much, but at least we both know the other is here. Jennifer Skidmore and I also acknowledged that we Michiganders are in attendance (she was also playing at the time).

My tournament plan is as follows:
30 minute quad tourney for practice on Monday. More preparation is planned also.
Tuesday is study and resting for my opening round of the US Open.
Wednesday thru Friday is two rounds a day – and that will cover that.
Saturday and Sunday is too far away to worry about as those are the last two rounds – going off at and respectively. I should be chessed-out by Sunday evening.

I’ll be posting at least daily and hopefully more often than that. - MN
Posted by Nik Faldo at 11:47 PM