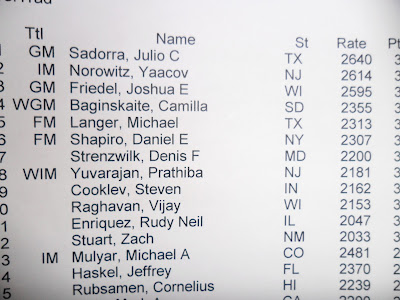 Thought I would give you a look at the top players at the tournament - so far. I say - so far - because the 6 - day schedule starts tonight and a few higher rated players may join this nose bleed group.

Hey, wait a minute! I don't see my name!

Oh, that's right. I start tonight also. That explains it. 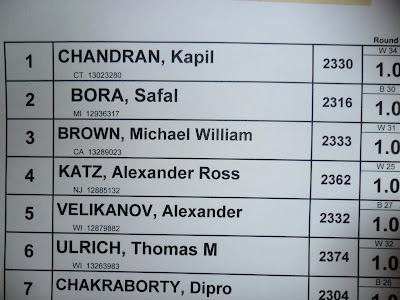 Why is my state always the toughest in the country?

Michigan is always in the top five of virtually any category you want to name in the country.

Did you know we lead the nation in charity giving per capita almost every year?

Chess is no different.

Safal Bora is playing for the High School US Open Championship as I type! 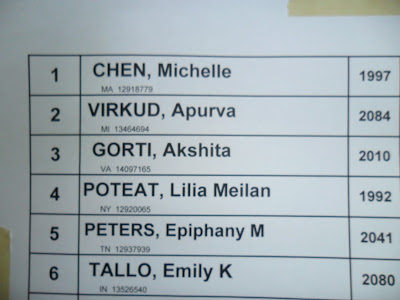 Apurva Virkud is also playing for the title in the Girl's National Invitational Tournament!

Michigan is always a strong force to be reckoned with no matter what the competition is.

It must be the water.

Look at the ratings of these kids!! 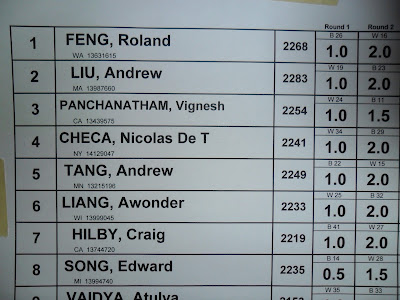 And then there is Edward Song bringing up the rear in the K-8 Championship.
Yeah, he is only tied for THIRD going into the last round!

So let's re-cap. Michigan is tied for 1st twice and tied for third.....in the three tournaments that are running!!

Just complete domination. No other state can claim this type of performance.


And then, another little personal note. I was browsing thru the chess store.......again.....but I am showing some restraint. It was only browsing session #14 in the 3 days I have been here. Something about looking chess sets and chess books......
Anyway, I am looking at a book "My 100 Best Games" by Alexey Dreev. I noticed that his style is similar to mine and he plays openings with Black I play and I am thinking about buying it. Maybe before I leave. I - of course don't need it. I have close to 100 chess books now I don't have time to digest.
But ......I've picked it up to flip thru it on probably 10 of the 14 browsing trips I've made. So, I'm probably ready to shell out the $30 + tax for it eventually. There are 5 copies there so I am not worried they will all walk off - like my bargain chess board did - should I delay.
The Proprietor walks by and says "You want that one?"
I say in my strongest negotiating tactics voice, "Yes, but I'll probably pick it up later. Can you hold it for me?"
I was playing hard to sell, and he fell for it.
He said, "I'll tell you what. You bought a board from us. How about $20 out the door right now?"
Sold!
Guess he didn't know who he was messin' with.
Posted by Nik Faldo at 1:22 PM