The final round pairings are below. It has been another exciting and close competition. We have three players tied at the top and two more players a half point behind.

And the K-12 section of the tournament is also very close. Stop by and watch the exciting last round this Monday Night - May 7.

And don't forget our Kid's Night on May 14th. As the school year ends, many chess programs close for the summer. Not at LCCC! We are here every Monday night (except of course for holidays), and our special Kid's Night is the 2nd Monday of every night. See you at the Club!

Here are the pairings with the player playing White listed first:

Good luck to all the players!

And here is a puzzle for you to solve from the 2007 Isle of Mann International Open tournament. USA GM James Tarjan - playing White - found this winning line.

We had ten players this night for casual chess, lessons and reviews of current and past games played. A very nice evening of chess was experienced by all.

Next Monday starts the 3rd round of our Club Championship. Of course there will be non-participants looking for casual chess games also. So stop on by to watch the tournament action or to play some chess yourself.

White is soon to be GM Larry Evans and playing Black is soon to be GM Herman Pilnik. But don't think because these player's ratings are sky high, that they don't make mistakes. They do, especially in the face of a possible 1st place finish up for grabs and the inevitable time pressure (which is why chess clocks are used in tournament play).

Besides being a very entertaining, this game was one of the games used to test chess playing computer programs to see if it would see White's 24th move! And if it did find it, how long did it take the program to find it? 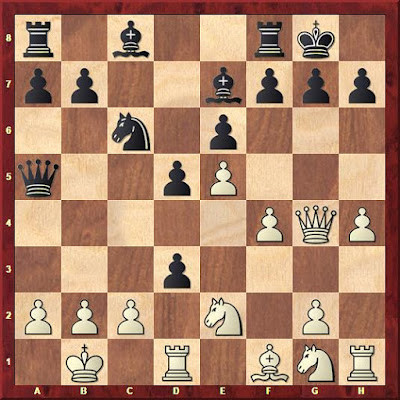 Black is threatening a double attack after 13. Rxd3, with Nb4.

Interviews after the game with the players confirmed that BOTH assumed they were winning here! But Pilnik with Black is the one not hallucinating as he has a completely won game (-4.3). Maybe it was Larry's Evan's lack of concern on the other side of the board that made Hermann Pilnik a little too timid - thinking "what am I missing here?"

The light came on for White at this point and was thankful Black did not go the proper route with 16. ...Bb4, 17. Ra3, Ba4. Now Larry thinks maybe his attack will work blissfully unaware he is still two pawns behind positionally (-2.1). Hermann, dejected he didn't close the deal, seems to drift and throws away his advantage.

Today's weaker programs find it in less than 10 seconds. The best ones - instantly!

The 2nd round of the Club Championship was completed this Monday. Pairings will be out by this coming Monday - which is (drumrrrrrrrrrrrrrrrrrroll!) - Kid's Night!

May 14th is Kid's Night, and not a tournament night. So come on by with the younger chess players in the family for some casual chess or lessons if that is what is requested.

Kid's Night focuses on our younger members, but there is still some casual chess available for the adults of all ages. So come on by!

Now take a look at how not to play an endgame.

Here we have a double rook endgame. A quick look tells us Black is up one pawn (-1). But a closer look shows us his advantage might be bigger still! After all, he has a super majority of pawns on the queen-side and his rooks are doubled for maximum strength.

But Black has some negatives also. His rooks are what is known as 'biting on granite' as they cannot yet do much on the f-file they are concentrated on. And the Black King is a long way from getting in this endgame struggle right now.

As for White, to offset his pawn deficit, his rooks are more active, his King is closer to the action, and he has a small majority of pawns on the king-side.

To try and push this to a win, Black must active his rooks and king to better squares so he can quickly start moving his queen-side army forward. To hold a draw, White must keep Black's rooks pinned down protecting the backward c-pawn. And if White can somehow keep Black's king out of the game, White's own king could be the drawing difference. Let's see what actually happened in tournament time pressure.

We had 10 players this Monday night as Round 1 of the 2018 LCCC Championship concluded.
Although the tournament entries are closed, there will still be players looking for a casual game. So don't be shy - show up to play or watch the tournament action.

Now a quick article about the best news in US Chess in decades! Well, we had the story that Fabiano Caruana will play for the World Title in November of 2018. But this story should have been posted before that one.

Our United States Chess Team beat 180 other nations in the 2016 Chess Olympiad! Bet you did not know that!

Bet you didn't know our Women's Olympic Chess Team finished 5th. This is in spite of the fact that other nations support women in chess a lot more than the USA does. Actually every nation on the planet supports their chess players better than the United States does.

I could go into a diatribe about the pathetic state of our nation's journalism, their standards and their priorities, but I will refrain. Let this article be about our great - but completely ignored - chess team.

Chess is bigger in the United States than the pathetic media coverage it receives. There is plenty of blame to go around. But it starts with chess players themselves. If we are not going to promote chess, why should we expect anyone else to?

Promote this result. Promote this blog. Promote the game. Write and call the media outlets and ask why this result was not published or broadcasted? Tell them about the scholastic events happening all over this state - and the nation!

Chess is still growing but the word needs to be spread. Get out there!