The Livingston County Chess Club is closed tonight due to weather concerns. Schools were closed today - which closes our location.

See you next week!

Here is a game that is instructional for beginners on the importance of developing your pieces and not getting your queen involved too early in the game:

The beginning of Black’s problems. Black thinks he will win the pawn at d4.
After all he has three pieces attacking it and White only has two pieces guarding it.
But the queen is not a good piece to have out on the chessboard early because she can be hassled by the minor pieces all over the board.
Black also is always a move behind and to waste moves to keep your queen safe puts you farther and farther behind in the development of your own soldiers.

Black should have played Qd8 and get his queen to safety. But no one likes to go backwards.

It looks like Black can win a piece by taking the bishop at b5. But then White plays Nc7+ and Black’s Queen is lost to a “family fork.”

The only square for the Black Queen and now White wins a pawn and again threatens the Queen.

Can you find the best move for White that traps the Queen and makes Black resign?
Posted by Nik Faldo at 2:53 PM No comments:

By the way - we are open tonight for chess on MLK day.

Our Club is averaging 12 players every Monday night, so you always have a full field of willing participants for a friendly game.And of course for beginners or people looking for a lesson, someone will be glad to help you with that.

On the road, our Club members played in the 2019 Michigan Class Championships. This tournament held every year in Lansing, Michigan at the Marriott Hotel is one many players look forward to. It is well run by TD Jeff Aldrich - VP of the Michigan Chess Association.
And this tournament has the players broken into sections according to their ratings (ability). So every game is evenly matched - and therefore always tense and exciting.

As you can see, LCCC held their own in this tournament as none of our players had a negative result!
Well done team - with a combined record of 12 wins, 6 losses and 12 draws. You can also see our members come in all current skill levels and working to get better!

Now for a game from two Grandmasters - GM Joel Lautier vs GM Anatoly Karpov. Your scribe picked this game because it looked interesting and Mr. Karpov had annotated it heavily playing Black. So let us learn together what a World Champion chess player and a computer is data crunching at 2 million moves a second are both thinking during the game. 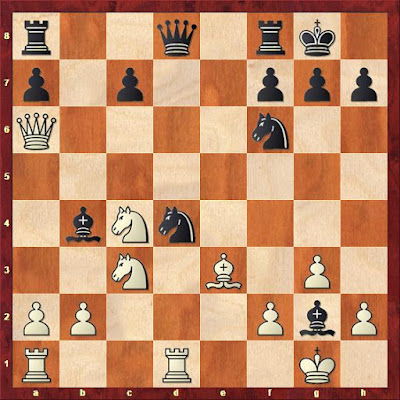 Igor agrees that the move played was better by a pawn and a half (-.5 versus -2).
Your writer agrees with Karpov. That move deserves an "!", as Kxg2 looks too natural to us mere mortals.

18. Kxg2       Rc8!
This is a very important move that Igor ignores as best and what else can be played.
Karpov explains his plan as Black is lining up against the loose knights on the c-file.
Isn't peering into the mind of a grandmaster fun!

19. Kg1         Re8
The White pieces - the knights in particular - lack the coordination to form a blockade in front of the passed d-pawn. In addition, the White Queen is out of play on a6 and has trouble coming back home.

Be sure to stop by next week as Monday January 14th is our popular Kid's Night. This is the night where our younger members and guests get the full attention of the of the veteran players.

We make sure they are paired with other young players and can get lessons from our stronger players or coaches if they wish.

Be sure to stop by for this fun event.

Now here is an endgame from the 1960 USSR Championship. Endgames look like the simplest part of chess since there are less pieces on the board. But in reality, they are the most tricky and complicated.
In this position, White has a commanding material advantage. But you see, the queening pawn for Black is about to even everything up.
White must find a way to stop the pawn.

Endgames can be tricky and complicated and not for the faint of heart. Also remember that in tournament play, the clocks for both sides usually don't have much time left. Coolness under pressure is required to find the best moves.
The best way to get that 'coolness' is to study and practice endgames.
Posted by Nik Faldo at 11:11 AM No comments: