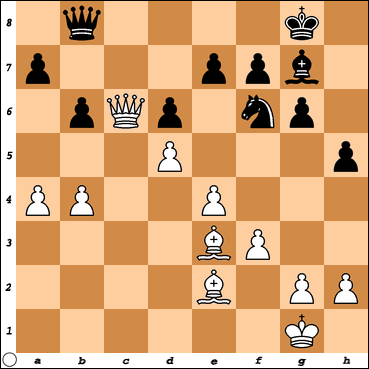 
Thanks Matt for the notes and the well played game.
Posted by Nik Faldo at 12:34 PM No comments:


﻿  LCCC set another record for attendance in a single night as twenty-eight players were in attendance. Thanks to everyone who participated in this new benchmark.
Our record at Teekos Coffee and Tea on Thursday night is still at eleven but we are averaging eight players there, so anyone interested can find a chess opponent either night.


The league leading Rabid Squirrels are tied in their match with the Sonics 1.5 – 1.5, with one game to play. If the Sonics can get the upset on Board Two, the league will tighten up and put the Squirrels back within striking distance of pursuers – the Tigers and Flames.


The Tigers drew their match with the Thunder. That will drop them into a tie for second with the Flames, who beat the 49’ers 3 – 1. Here are the current standings:
Rabid Squirrels -  9 points 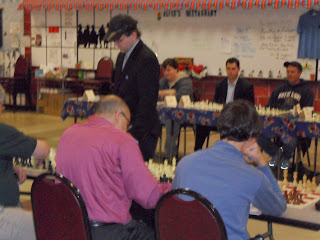 Open chess will be available at LCCC on Mondays – January 6, 13 and possibly the 20th – if the is open on Martin Luther King Day. We will see.


To our faithful readers, I just want to say – sorry – for the lack of posts lately. Sometimes life gets in the way of chess. Hate when that happens.


But there will be some great games posted, along with more chess news and updates from LCCC headquarters. So keep us in your holiday read list.


Merry Christmas to everyone and have a very happy holiday.
Posted by Nik Faldo at 1:47 PM 1 comment:

FIDE Master and Michigan Open Champion Seth Homa stopped by LCCC to give a simultaneous chess exhibition – taking on all interested players - at the same time!
A lucky thirteen players lined up to face Seth, and in the end, only Vince Valente was able to get a draw. The rest of us….well, at least we have a score sheet showing we played a FIDE Master. Seth went 12-0-1.

Everyone had a great time and Seth was a friendly and gracious guest. It was such a fun event, LCCC will do something like this again. Maybe a Seth Homa lecture next time. Stay tuned.
Let’s hear from Don Jones, participant in the simil for his take of the event:
“Seth Homa complimented our club, saying that we have a lot of extremely tough players. He said that most club exhibitions are done in about an hour and a half, but most of our players were still going at 2 hours and 3 games lasted almost 3 hours (when we had to be out of the building).
I lasted 30 moves but that is misleading. I used a chess engine called Houdini that is rated at over 3000 (the current world champion is rated around 2850) to analyze my game. At move 29 it said I had an equal game with Seth, meaning that neither of us had an advantage (in the opinion of Houdini, but I liked Seth's position better).
But the rules of the exhibition say we have to move immediately when he comes around to our board and I was in the middle of analyzing a very difficult and complex position when he arrived. I was considering a plan that looked promising but very risky so I quickly picked a move that seemed harmless.
But immediately after I moved I realized it was actually a blunder that resulted in me losing a rook so I resigned. To add insult to injury, Houdini says the best way to continue the game would have been the plan that I was considering when he arrived at my board.
﻿ I should have trusted my instincts rather than wimping out and trying to play a 'safe' move.
Of course, losing the rook didn't require ending the game immediately but I felt that continuing the game against a player of his strength would have been pointless and an insult to him.
Considering that Seth is rated at around 2430 or so I was quite pleased that my game didn't collapse by move 10, especially since he played a very aggressive attack.
Seth is very young and could be a grandmaster in a few years if he can raise money to play in more international tournaments.
The guy who drew Seth asked him to sign his game sheet, and plans to frame it and hang it on his wall, because he says otherwise nobody will ever believe that he had a draw against a world class player. Of course, Seth was essentially playing 14 simultaneous games of speed chess while we only had one game to worry about and could think the whole time he was looking at other games.
﻿
We invited Seth back for another exhibition in the spring and he agreed. Hopefully we can find a date that works for everyone. I will definitely play again. It was a very amazing experience and I learned a lot.”
Thanks Don!
Our event did bring us three new members of LCCC – Dan C, Geoff O, and Will S. Welcome to LCCC gentlemen.
﻿ Dan and Geoff played in the simil. Don’t worry guys. For your information, the rest of the players at LCCC are not as strong as Seth! Although, some are a lot closer to Seth’s strength than others. The fun part is to come and play chess at LCCC - and find out who those players are on your own.
Just a reminder: League night is next Monday, December 16th. It will be our last regular meeting for the year at the , as the Center will be closed for the Christmas Holidays. We will return there on .
The Club will still meet at the Teekos Coffee and Tea Shop in Howell at Grand River and Latson Road on Thursday nights – December 12, 19, 26, Jan 2, 9, etc.
Be sure to stop by, have a coffee and play some chess.

Seth Homa will be giving a chess exhibition at LCCC this coming Monday.
He will be taking on up to 40 chess players at the same time!
Stop on by and grab a seat in the match.
The cost has been reduced to $15 and $10 for children under 18.
Be there by to lock up your seat as there is a limit of both spaces and time to get registered.

Meanwhile the LCCC Chess League completed Week 5, which means we are half way thru. December 16th will be the start of the 2nd half. It took a while, but after the classic 1 vs 2 match up this week, some space for the clear cut leader has been created.

The second half of the round robin starts December 16 and here are the Team pairings:
Sonics vs Rabid Squirrels
Thunder vs Tigers
Flames vs 49'ers

Dec. 16 will be our last official club meeting of the year. But we hope to still meet at Teekos Coffee Shop in Howell over the holidays on Thursdays - or any other day.
Posted by Nik Faldo at 6:52 PM No comments: