We had 15 players arrive at the LCCC for the Fischer 960 tournament action. We hope to post some games from the event soon.

We would like to take this opportunity to congratulate the winners of this week's games:
Jason M
Mike N
Don J
Paul M
Sam T
Luigi M (forfeit)

and a draw between Gene M and Ken T.

The next round pairings and standing will be posted soon.

Until then, here is a puzzle for your enjoyment.

Not a fast win, but a win just the same.

Surprises and a fun night of chess were had tonight at LCCC. We had a total of eleven players show up tonight that included three new members, one guest from California and one "old" young player - Scott M - who had not been at the chess club in a while due to work hours.

We would like to give a shout out to the new members of LCCC - Petro K, Ed U and Roger F. Welcome gentlemen!

We also had a childhood friend of Don J's - Kevin - who stopped in all the way from California. He fit right in and got right in and played some outstanding chess - and more importantly - had a fun time. Stop back in next time you are in the 'neighborhood' Kevin!

Next week will resume our Fischer Random 960 tournament, but don't worry folks. There will be 'regular' chess opponents hanging around looking for a game - so come on by!

And readers, be sure to check out the LCCC Hall of Fame on the right side of this blog. Congratulations to Americo and Marcello Milani!

Here is the pairings for next week's tournament action. The player with White is listed first:

Your humble scribe will be around with the 'app' to randomly give you your piece starting positions. In Fischer Random 960 chess - your back rank of pieces are 'mixed up', taking the opening book knowledge out of the game.

Next article will feature a 960 game played at the club for your amusement and amazement! Well, it will be interesting to look at at least.

Until then, here is a puzzle taken from a game played by GM Rustam Kasimdzhanov vs IM Alexander Chernlaev in the 60th anniversary of the Wijk ann Zee GM Tournament, held in the Netherlands in 1998.

White to move and (for GM's - and most players) win!

For you less experienced players out there, it is more important that you see White's positional advantage - BEFORE deciding a move - more than figuring out the best move.

But one will lead you to the other. But try and figure out why White has an advantage right now.
Posted by Nik Faldo at 3:51 PM 2 comments:

The new tournament results and the pairings for the July 25 Round 3 will be published soon.

Open chess will be held on July 18.

We had two new members join NPP this week as Shan G and Paul G got involved in the 'regular' casual chess also played this evening. Welcome to both of you.

We also had a visitor from Chicago who stopped in to get his chess fix. That gave us a total of 17 players to the club. This means that if you stop by, you will always find a player to play.

This different type of chess - called 960 - makes you play chess from the first move due to the opening book moves are not available.

This makes you start planning immediately. John Nunn, a grandmaster and one of the world's most respected chess writers, gives some tips on chess planning in his book "Secrets of Practical Chess."

Being 'practical' is certainly a requirement of Fischer Random 960 chess. Here are GM Nunn's tips:

1. Make sure your plan is beneficial. There is no point aiming for a target which does not enhance your position. Like swapping your 'active' pieces for your opponent's 'sleeping' pieces.

2. Make sure your plan is realistic. There is no point in embarking on a five-move plan if your opponent can wait for four moves and stop your plan on move 5, then start his own.

3. Make sure your plan is not tactically flawed. Even if your plan is worthwhile, it's no good if your opponent can mate you first!

Nunn also points out that you must be willing to change your plan or make adjustments if you discover new information or your opponent finds a move you missed. 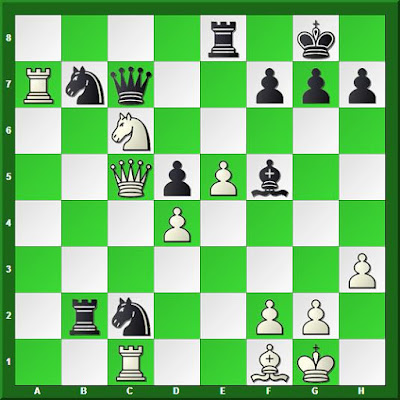 White to play and win. Find the move.

On a very warm night - some very hot chess was played in the very cool and air conditioned chess club.

If you have never played 960 chess, here is your chance! We had 13 players enter and we need another to make the pairings even. So you can still join this event in our next meeting - and round - on July 11 at 6pm. The round will start at 6:30 pm.

Here is the line up for the July 11 round (White is listed first):

As you can see, Luca needs an opponent! So stop on by and get in this tournament!

Lets take a look at some 960 action from the first round. As you can see, the board is set up in a random fashion. This eliminates the standard chess openings from a players memory and leave you to "play chess" from the first move.

Two things can happen here. One is that tactical shots can be found quickly due to the random structure. Sometimes pawns are unprotected or pieces are sitting unprotected from the very first move!

The second issue is that your mind will sometimes picture pieces in their normal location. If you are not consciously aware of where your back-rank pieces are actually sitting, you can get in trouble quickly. 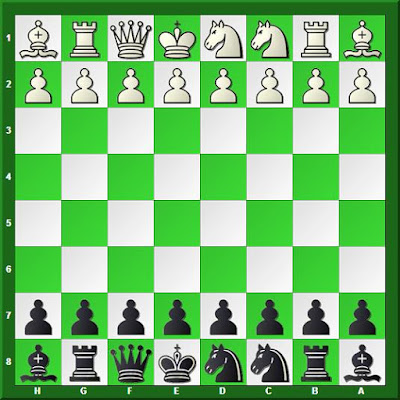 Take a look at these 960 miniatures:

1. g4      Nc6?
Already not a good move, although it is fine in regular chess - and that is the danger of 960. White can now play b4! and gain space and threaten to make Black waste time moving his knight away from the pesky and rook protected pawn. That rook is not usually on b1 of course.

2. Nd3      Nd4
Black immediately going after the unprotected c-pawn - but neglecting his own development.

7. Bxa8       Rxa8??
Yes, Black is playing by rote. His king is trapped on the back rank and his Queen is not protecting anything. 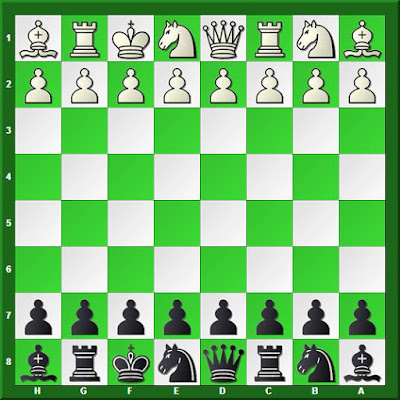 Or how about this one:

Black mentally thinks his rook is on a8, but it is not!

Chess 960 is a nice change of pace from regular chess and a new challenge for all chess players.

Get here on July 11 and get in on the fun.
PS: There will be players hanging around looking for a casual game of regular chess also!