Eight players entered our 30 minute championship. We will play probably 3 rounds - one every other week - skipping of course Kid's night on December 11.

Hopefully some players will share their games with us.

In the meantime, here is a slug-fest from the 2000 US Championship.

The players play for victory as the clocks tick down - and the errors by both - go back and forth.
But this is what makes chess so exciting, as the game can turn on every move.

We had eight players tonight for our Kid's Night.
We welcome two new players to the LCCC family - Olivia and her dad Jacob.

Our Action (30 minute games) start next Monday. Not sure if we will play one or two rounds, but our TD Ken will let us know. Join us for this free tournament. It is a great way to play some semi-serious chess and practice your tournament chops.

LCCC opens at 6pm and the tournament will probably start at 6:30 or 7pm. Get there before 6:30 to be sure to get a seat.

Meanwhile, Don M. gave us another game to review. Don is playing Black and his notes will be in [brackets]. The computer Igor3000 will make comments without brackets.

Meanwhile, here are two puzzles for your practice and enjoyment:

We had seven players and rotated thru casual chess and position studies. A great time had by all.

Now a game from one of our members - Don M (1850), playing Black in this game. He supplies his notes and Igor 3000 also adds his 2 gigabytes of comment on the strength of the positions. 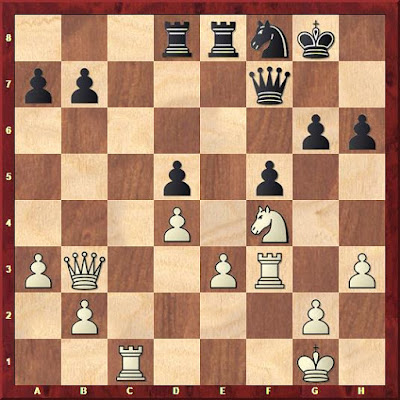