It was a cold and rainy night and that probably dampened the turnout.
The tournament started with 6 entries with one pairing postponed due to some scheduling confilicts.

Thats ok - cause we roll with things like bad weather and scheduling issues at LCCC.

Looks like we should have more entries this coming Monday, so some tournament action will be held this coming week, along with our usual lessons and casual chess.

It also means on Dec 5, the 2nd round will begin with the entire tourney field all together.

Round 3 is Jan 9 and Round 4 is Jan 23, so this tournament is not an every week commitment.

Be sure to get to the Club by 6:30 this Monday to make sure you get a seat in this fun event. You don't want to miss it.

So here is an interesting endgame. Early notes are by an Expert (playing Black against another Expert) and an International Master - without the benefit of a computer. [Igor3000 will chime in].


[The notes show what was played and how Black loses the game. Igor3000 has Black actually winning right now at -.30 of a pawn in a drawn endgame if played Igor-esque. But of course what makes chess so much fun is that humans are not Igor-esque.]

The right move was 39. h4!! (advance the candidate). But the text is good enough. Here is the rest of the game.

[Both moves by White actually raise Black's advantage to (-.7). The correct move order was 39. Rb1+, Kxa7 40. h4! and Black's king is even farther away from the action and stuck on the a-file. This keeps Black's advantage small.

There is a World Chess Championship going on in New York City, but you would not know it due to the lack of coverage by a media that would rather cover immature college students trying to look and feel important.

But, no fear. Search and you shall find.

Meanwhile, back at LCCC, we had six players for some casual chess on the Monday of Thanksgiving week. But we swing back into tournament action next week!

So you see, this is not an every week commitment. It is - as always - an excellent opportunity to experience 'tournament style' chess, without a ton of pressure.

LCCC welcomes players of all strengths and will help you get better - before, during and after the games!
Stop on by and check it out

Now for a look at some sharp tactical chess.

Here is a game by the Russian grandmaster chess tactics giant - Mikhail Tal - before he was a grandmaster! Here he was simply a student playing in a simultaneous exhibition against Grandmaster Ratmir Kholmov in 1949, and GM Kholmov - with White - obviously underestimated his opponent.

Notes by GM Lev Alburt with help from the computer [Igor3000]. 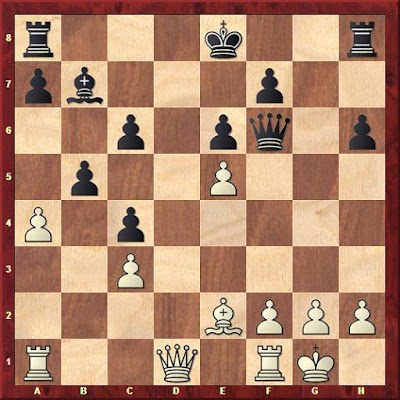 [ Lets see.....I am facing one of the strongest tactical chess players that has ever played the game of chess.

He has an open file (g-file) to place a rook on to stare at my king, a bishop and queen aimed right at my king, and another rook poised to take over the d-file and harass my queen.
What.......me worry?]

It was a fun and laid back night of casual chess at LCCC.

We were hoping for an influx of new players tonight, but that did not materialize. Mr. Terry, our in house instructor, was ready and waiting. Oh well. We are here when new players want to stop by - to learn, train or play!

Players, our Action Tournament (30 minutes per player with optional 5 sec delay) will start after Thanksgiving on November 28, 2016 at around 6:30. Get to the club a 6pm to make sure you get a seat.

This is great tournament practice or a great way to get familiar with serious (semi-serious) chess. Be sure to get in the action.

Meanwhile, here is a battle from the 1998 Chicago Open between GM Gilberto Hernandez (W) and GM Nigel Davies (B) in the third round. Someone snatches a poison pawn which leads to a queen sacrifice.

Not any old queen sac where one side gets mated, but one where the game stays close to even with chances for both sides after the smoke clears. Enjoy.

Notes by GM John Fedorowicz prior to computer assistance. [Igor3000 helps with the computer analysis.]


[The game is even at this point. Black to move.]

Congratulations to our tournament director Ken Tack on his victory in our 2016 Rapid (15 min) Tournament.

The next tournament up on the schedule is our Action Tournament (30 min per player - 5 sec delay optional). Our tournaments are usually free, but discussions are in the works to charge and small entry fee to give away small prized and/or get the tournament rated by the United States Chess Federation.

In the meantime, here is a puzzle for your enjoyment.

White to move and win.

Halloween Chess in 2016 - Tournament Pairings - and a Lesson from Capablanca

It was a bit of a slow night at the chess club on Halloween Monday - 2016 as six players were in attendance. Now that is scary!

But some fun casual chess was had by all.

Here are the tournament pairings for Round 3 in our Rapid (Quick) Chess Tournament that starts back up this coming Monday. But never fear chess fans. There is always someone who was not in the tournament hanging around to play casual chess with you. So stop on by!

And now for a Jose Capablanca chess lesson (with our thanks to "Think Like a Grandmaster" - by Alexander Kotov). Igor3000 gives his computer 2-megabytes in [ brackets ].

"White is a pawn up, but it is of no significance. Black's rooks will soon occupy the a and b-files and his bishop will cut the board in half. In just a few moves, Capablanca not only forces White into a hopeless position, but literally smashes the apparently safe position of White's queen-side pieces."

[Not an obvious error, but 14. f3 was best, and White remains only a (+.5) pawn ahead. As Kotov pointed out, Black has the positional advantage. By not protecting the e-pawn to free his knight from guard duty, the tables abruptly turn. Oh, the subtleties of Grandmaster chess - even in 1914!]

23. Qe3       Rb4
"Capablanca is not prepared to exchange his positional pressure for a measly pawn. His aim is to destroy the enemy's queen-side."
[Nimzovich helps out with his next move. White needs 24. Rd3 to hold out. Instead,  Black will lead by two full pawns positionally.]