We had ten players tonight at the Club and four played in the 2nd round of our 2018 Fischer 960 Random Tournament.

This is a fun event! For those of you not familiar with 960 Random chess, it was a game invented by Bobby Fischer in order to "save" chess.His idea was to take the back rank of the pieces and randomly mix them up.

There are actually 1320 different combinations of mixed up positions, but Bobby wanted to save the idea of castling. So in order to do that, the 360 positions where the king is not in between the two rooks were eliminated.

There are now apps for phones which will do the random generating for the placement of the pieces. We use them at the Club. We turn the app on and roll a six-sided die and hit the random generator button the number of times the die tells us to, in order to get the starting position of the back row pieces.

But if you don't have an app, that single six-sided die will be able to do the randomization for you. Here is the formula:


A common one is that proposed by Ingo Althoefer in 1998, which requires only one six-sided die:
This leaves three empty squares. Place the king on the middle empty square, and the rooks on the remaining two squares. Place all white and black pawns on their usual squares, and place Black's pieces to exactly mirror White's (so, Black should have on a8 the same type of piece White has on a1, except that bishops would be on opposite-color squares).

Garry Kasparov, one of the world champions considered by some to be the greatest player of all time, gave his opinion of Fischer Random 960 chess:

"From my viewpoint, Fischer Random chess is entirely acceptable. But I propose that instead of 960 possible positions, most of which are positions that hurt the eyes of serious chess players, downsize the number of positions to 20 or 30. It goes without saying that in several years theory will be developed. To entirely exclude opening preparation is unimaginable."

Especially when that preparation is to your advantage as a GM!

Your humble scribe disagrees completely with GM Kasparov. The randomness is exactly what makes this type of chess a blast to play. And a genius like Kasparov and other GM's could easily memorize several patterns in 20 or 30 positions - and we would be right back to what Bobby Fischer was trying to eliminate - volumes of opening preparation.

Standard chess is challenging enough for us mere mortals. However, if you have an opponent who has some pet openings you cannot seem to crack, Fischer 960 may even the playing field for you.


The club had a quiet 020518 evening of casual chess with five attendees. But the club was rocking on Kid's Night with fourteen players! It was a nice evening for chess indoors at our beautiful playing room as it was a very cold winter evening.

The Club WILL BE OPEN next week on President's Day, so our 960 tournament will continue on that evening.

Stop by to join the tournament or play some regular casual chess. See you next Monday!

Here is a game played thru the mail (way before the internet). The opening is called the Ruy Lopez and has been analyzed to death for literally centuries.Since it was a postal game, the two players probably referenced books to carry the opening as far as they did without any major blunders.

But the opening and the positional play is still good to see for all players, which is why is is shown here.


White forks the b7 pawn. 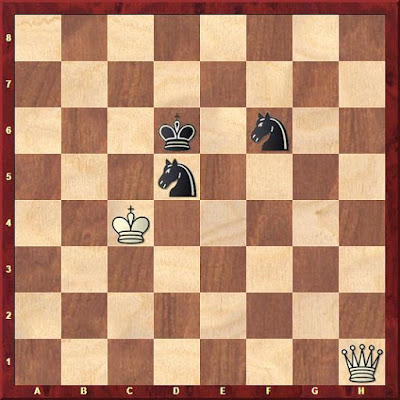