Very exciting evening of chess action. The winners tonight were:

Round Four pairings will be published soon.

But in the mean time, Zack R does it again and plays another very exciting and educational game that your scribe just had to cover for you. 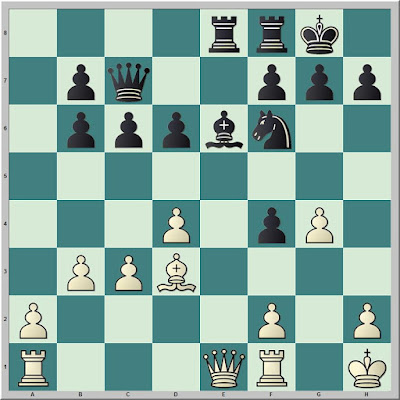 It was a Fischer Random 960 game. But we are going to pick it up in the middle and it looks like a standard game.
However, Black has built a big lead to this point.
Black is sailing along and has slowly built up a huge positional lead to go along with his piece advantage (-6). He has an extra pawn and knight and better protection for his King. White can only attempt for counter-play and hope Black gets lazy with this huge lead. 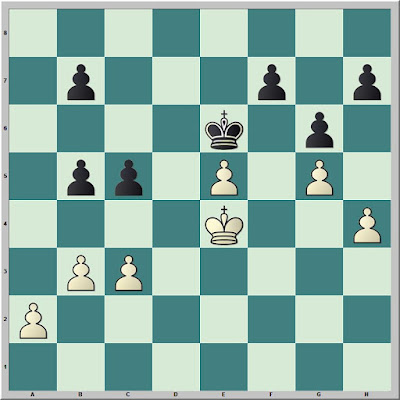 Game agreed to a draw with everyone’s clock time running low.
However,

Black’s last move was a game LOSER!
Black has walked into what is known as a ‘zugzwang”.

In other words, he will lose because IT IS HIS MOVE! These are very painful and this situation happens fairly often in an even endgame. Looking for them MUST be part of your endgame strategy.

Black had to play 39…..b6 or Ke7, giving him safe move options. Black cannot allow the White King entry into his position because White has a dangerous e-pawn. Black’s c6 and g6 pawns were keeping White’s King at bay. Now Black will be forced to ‘move’ his King and allow the enemy monarch into his camp.
So now there is:

We have the pairing for Monday's Third Round.

Now, for everyone else it's casual chess.
Stop on by to play or to watch the exciting chess action.

Players, if you cannot play this Monday, please email the club and let us know.

See everyone Monday!
Posted by Nik Faldo at 9:15 PM No comments:

Not only did we finish the 2nd Round of the 960 tournament, but we did some group analysis of the games! When I say group - I mean a group! Six of us gathered around and re-played both of the games played tonight.

This type of analysis was not only a learning experience for everyone, but it was a lot of fun. As we poured over each move, everyone would grade it and come up with the best next move! Meanwhile, we had Stockfish5 on a smartphone cranking out about a million moves a minute - giving us the proper next move, 2nd best move, 3rd best move and 4th best move - AND which side was winning the game AND by how much!

Many times - to our amazement - the players present did not pick ANY of them! Although, to be fair to us humans, sometimes there was not a lot of difference in the top 6 moves.

Mike N won his game, but post analysis showed his opponent missed a free rook! Whoops! So that game won't be making it to the blog.

The draw between Ken T and Zack R will end up here. The reason you will see when it is posted.

That means Zack R will have back to back games posted here! Some people just have a knack for playing entertaining chess. We pick play after move 20.

Black is up a pawn over Zack R, who turned in the game for analysis - and provided some [notes in brackets]. Notes from the players is always a welcome addition to any game replay.
The rest of the notes are from your humble scribe and Igor3000.

But besides the pawn advantage, Black also has the safer king, the bishop pair and a rook that can take the open f-file. This all adds up to a 3 pawn lead positionally, giving Black a commanding 4 pawn lead (-4).

[At this point I have less than a minute on my clock (but with a 5-sec delay) compared to 8 minutes left on my opponents. Pushing d6 was a last ditch effort to salvage something here, and only one move makes it work.]

But the rest of the moves are of White avoiding checks and Black unable to make headway with his time advantage, so they finally agree to a draw.

Round Two of the 960 Tourney - Casual Chess Next Monday


We had two tournament games played this week. Vince V and Luke S both won their games.

Why not Nc3? Too many people turn the Sicilian into a memory contest. With a ‘Closed’ variation, White steers the game into channels where better positional understanding is at least as important as memorized tactical sequences.

A tactical error, though it is buried a little deep. Black leaves his knight on c6 without the protection of the b-pawn, and exposes the rook on a8 to attack along the h1-a8 diagonal. It is important to look thru intervening pieces and see that White’s bishop on g2 is threat to anything unguarded on that diagonal. [White is up positionally the equivalent of a pawn. (1.0)]
9.      e5!                   dxe5

Of course White should be more modest and settle for 11. Bxe5, Bd7 12. Bxa8, Qxa8  and Black has only lost the exchange. Regrettable, but Black could still play on with more hope for a reversal of fortunes.


We had casual chess on tap tonight with regular chess, speed chess and 960 chess all going on at the same time.

Eight players showed for the hot chess action in the cool chess “arena”. We had a new member and a visitor show up this evening.

We welcome Don W to the LCCC!

In addition, a friend of our club Secretary Don J stopped by on his vacation travels. Visiting in Walled Lake – Kevin – stopped by to check out LCCC as he had heard about us from Don. It was great to have you here Kevin.

Now just because the tournament is in full swing, it certainly doesn’t mean that casual chess will not be available. There are usually some 960 haters hovering around looking for a regular game.

AND – if you still want to try your hand at 960 and wish to enter the tournament late – that is no problem either. We will pair you with someone for this round, or for sure next round.

Your humble scribe will attempt to analyze some games in time for the next posting, but summer, yardwork, summer, golf, summer, vacation, summer, BBQ’s, summer, the lake and summer have all burned up time.

So right now, I leave you with this puzzle. Good luck!
Posted by Nik Faldo at 6:20 PM No comments: