The Club is rolling along but have to take a break on Labor Day. We will be back on Monday September 9, 2019 at 6pm. AND that will be Kid's Night also, so bring the kids to give them a break from the shock of starting school again.

If you love chess and have some free time, the Michigan Open will be going on in Lansing at the Marriot Hotel. Stop by and watch the chess tournament, just to see what it is like. If you want to play, you have the option of the Friday thru Monday or Saturday thru Monday schedule. 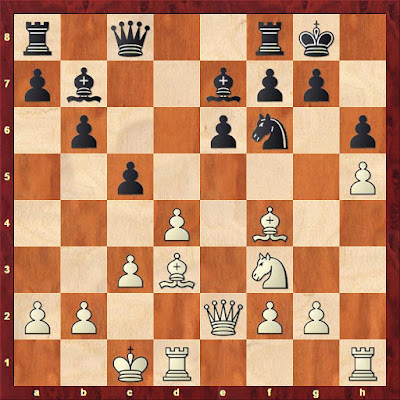 The game is even at this point, but White is going to now take advantage of Black's slightly cramped position.

Chess lost another one of it's best advocates, teacher and friend this year to Father Time at age 96.
Semen (Sam) Doroshko was a Jackson, Michigan resident since he immigrated from the Ukraine in 1950 at the age of 27.
Six years later, "Sam" founded the Jackson Chess Club in 1956, which he led for twelve years as their president. That was where Mr. Doroshko liked to play his chess. He did play USCF tournament chess, in 2004 and 2005
But at age 81, he 'retired' from tournament chess, but still was a weekly visitor to HIS club.
For Doroshko, chess isn't just a game, its a way of life. "In my view, you have to patient to play chess. It teaches you how to control your nerves and not be jumpy. It is interesting to outsmart your opponent."
In a spiral bound notebook, Doroshko keeps yellowed newspaper clippings as far back as 1950. Some show the young Doroshko showing the same concentration he gave the game of chess all his life.
The Jackson Chess Club used to meet in the old City Hall and then later to the Jackson YMCA.
Doroshko would help run chess tournaments there and would play young chess players - sometimes 10 at a time, handing out lessons as he played them. "I like to see young people enjoy the game," he would say.
Semen Doroshko grew up under the iron fist of Josef Stalin. At 19. Sam immigrated to the USA by way of Germany - where he had been taken to work as forced labor for the Nazis during WWII. Leaving his home at the time meant leaving his family and also put a stop to his training to be an electrical technician.
After the war, Sam met his future wife Anna (Staruchina) in a displaced person's camp. He then was able to take his wife and 1st child Luba to the USA to work at an Indiana farm. They were there for a year before moving to Jackson, Michigan.
Sam found some construction work before opening Doro Window Cleaning Company. With his wife's assistance, the company grew into the largest window cleaning/janitorial service company's in the Jackson area.
Sam leaves behind his wife Anna, daughter's Luba, Lucy, Anna and Irene, son-in-laws, grandchildren, great-grandchildren and even two great-great grandchildren!
LCCC heard about this fine man and chess legend thru his daughter Irene, who stopped by LCCC and donated two of Sam's chess sets. She knew her father would want those sets to be in the hands of other fellow chess players who love the game as much as he did.
Thank you Irene, the entire Doroshko family and of course ….Sam.