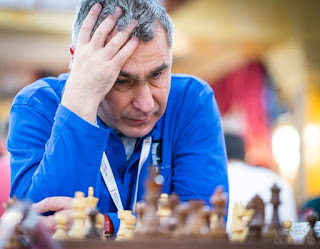 Twelve strong for our meeting at the Buffalo Wild Wings in Brighton, MI on Monday May 10, 2021.

Now for the article:

I stared at the chessboard in front of me. It's hopeless now. Even against this opponent who allegedly is rated 400 points lower than myself. But, this is after all, the US Open. Not too many players entered this tournament after 'padding' their rating on the high side.

Doesn't matter who is beating you anyway. It hurts when you know it's time to resign. It always hurts, at least a little bit.

Even though my five previous losses in the last seven had numbed me a little from the usual pain of tournament chess losses, this one was going to really send me into a chess depression. This loss was going to be even more devastating to my rating as it was going to be to my ego. My chess ego was already approaching zero, and dropping rapidly.

I turned over my king and shook my very young opponent's hand and told him "Nice game. You played well." Six losses and only two wins, with one round to go. And that round was one I no longer had any desire to play in. As I stumbled to my room, I wondered how it all went so wrong. After all, I tied for first in a pre-tournament US Open Quad - two wins and the dreaded 'GM draw' in the last round to clinch the tie for first.

But now, in the main tournament, I had two wins against very weak opponents and six losses, with four of those losses against opponents I could expect to beat or should beat. I had no confidence I could beat the next 'lower rated' player I would probably be paired with. It was going to be a very long 500 mile drive home as it was. A loss in the last round might have me looking for taking a short cut into Lake Michigan from Wisconsin instead of driving around it!

US Open rounds are played in the evening. But falling asleep after this loss was out of the question. So after watching TV until I could not keep my eyes open, and getting up only in time for a late lunch, it was time to prepare for the last round.

That is when the gremlins of negativity, laziness and self pity started talking to me in my head. "Prepare? What for? You will probably have a real easy opponent that you will finish off quickly. And even if you draw or even lose, so what? You are out of any prizes anyway. Better to finish the game early and enjoy the last night of your chess vacation."

As I heard the gremlins, it occurred to me that I had heard some of this 'out of the prizes' chatter the last round. Then I thought back and noticed that my last two losses may have had a lot of moves, but I was done awfully early.

I pulled out my scoresheets and played over every one of my games from this tournament. Even the Quad games. I quickly noticed two things in my last four games. One - I was 'forcing' play when the positions did not warrant it. Two - I was using less and less of my clock as the tournament went on.

In other words, I stopped working. I did not knowingly think I had, but I had started playing chess - in the US Open - almost like a casual rapid or blitz game! I completely deserved the thrashing I was receiving. I got lazy!

I looked as some of the moves I made in the previous games and wondered who had poisoned my ice water. Did I forget there are more than 16 squares on the board, and looking over the entire board might be of benefit? Or that when your opponent moves one of his pieces, you may want to consider why he did that? How about castling BEFORE blowing open the center of the board for no apparent reason?

The 'gremlins' had it right. I HAD gone on vacation - during a chess tournament!

The lesson here is that when you lose, learn something from it! Don't start a pity party where the only attendee will be you. Turn losses into a learning tool. Learn from your mistakes. So don't be sad.

And of course winning is not learning. You just did not make as many mistakes as your opponent did. So don't be happy.

Why was it again, that we love to play chess?

PS: I won the last round. Not so much because of my 'prep'. But because my opponent was on vacation even more than I was.

Sorry for the delay in posting. Lots going on in life that gets in the way of chess blogging.

Anyway, we had nine members at the Monday April 26 meeting and we grew to our highest total since the re-start to 12 members! Welcome all!

Our next meeting is Monday May 10th at 4pm until at least 9pm. So feel free to stop by.

We continue - as a club - to move up the Chess .com standings in the club rankings. We are nearing 500 wins as a club! Most clubs never get near that number.

If you like playing chess in a way that is basically - postal chess on Chess .com, then come join the Livingston County Chess Club on Chess .com and then sign up for the Team Matches as they become available. We don't care if you win or lose - just don't forfiet on time.

Also, if you are on the LCCC on Chess .com and are not playing in any Daily tournaments for us, don't be surprised if you are booted out of the club on that site. We cannot have players listed on our club that do not play in our Daily matches occasionally. The main reason is that it makes our club look bigger than we are, but also your rating may inflate our Team rating. Both factors may stop some teams from challenging us or accepting our challenges. You don't have to play in them all or even half of them. But some participation is required to stay on the on-line club on Chess .com.

Why no one would play at least a few games this way is a mystery to me. To have a few games going that you have 3 days to make a move seems fun and relaxing to me. And the fact you can play or analyze from your phone, takes away just about any excuse I can think of.

Now for the endgame magic! 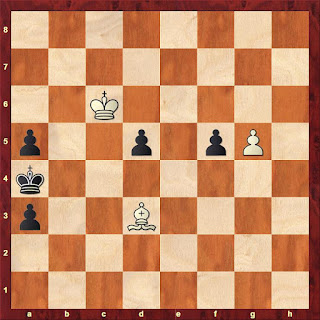 White to move and win. The material is even but White has a huge positional lead says Igor3000. But how?

Very  tricky endgame here. White must somehow stop the more advanced a-pawn of Black's and at the same time try to promote his only chance to win - his own g-pawn.

Needed to stop the a-pawn. No other move wins.

1. g6? will let Black queen his pawn first and is losing for White!

"Passed pawns must be pushed." Understandable for Black. The f-pawn is the only pawn White cannot stop without wasting another move. But now what does White do?

Threatening mate in one move with Bc2, so Black must delay his pawn advance by another move.

Black must remove the bishop in order to queen his pawn. But this takes too much time.

White's queen must first stop the a-pawn and at the same time either sweep up all the Black pawns or set a mate trap by allowing a queened pawn.