It was a Devilish good night of chess at LCCC on Monday. We had 8 players for casual chess and a couple lessons thrown in. See you next Monday - AFTER you attend:

EXIT 27 & go South [Left] to the FIRST turn-around
WE SHARE A BUILDING WITH METRO PCS AND GIBSON TV REPAIR.]

***  PAIRING FOR 1ST ROUND NOT GUARANTEED WITH LATE REGISTRATION  ***

Qualifications: ALL entrants must be UNRATED or have a rating LESS THAN 800 [U800] according to the latest USCF listings. ALSO, if you have previously won in a section, you may NOT play again in that section. Current MEMBERSHIPS in USCF [United States Chess Federation] or MCA [Michigan Chess Association] are not required. This is a WONDERFUL opportunity to WIN your membership in the USCF or the MCA. See prize list below.

Another fun night of chess and instruction at the Club. Eight members were there.

Here are a couple puzzles to give your brain some exercise before tonight's club meeting. See you there!

We had a crowd of twelve for this Kid's Night! We welcome newcomers to LCCC;

Welcome to your new chess home!

The next Kid's Night is November 13, 2017.  But of course everyone is welcome every Monday night.

Here is a speed (5minute) game from our resident master Jason, played on - line.

Even though these players are upper echelon caliber, speed chess lends itself to errors. Big errors.

Watch as the advantage switches sides or goes up and down. The ebb and flow of this game is entertaining.

Casual chess, game review, position studies and lessons were all part of the last two Mondays at LCCC.
Relaxing and fun nights of chess with plenty of different opponents available.
Next Monday - Oct 10, 2017 - will be our monthly Kid's Night.

So whether you have kids or not, you should be here on Monday because there will be plenty of new opponents available. And don't let their lack of experience or height full you. Many of these kids can play some chess.

If you do have kids, its a great family night out. It starts at 6pm and goes til 8pm.

Now here is an interesting game with White by a little known American chess master, George Shainswit. He was a top 10 American player in the early 1950's and reached as high as 8th in the USCF rankings.

In this wacky game Black (Philip Woliston - no slouch either) is lost after a dozen moves and was completely immobilized by move 28. 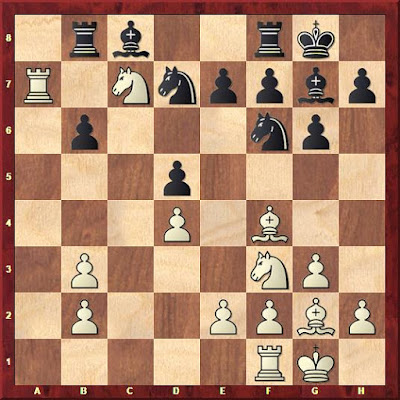