LCCC had a night ten kid turnout on their night, with 6 other 'older' kids in attendance.

Then casual night had five members arrive to greet our newest member; Richard. Great to have you here.

Stay tuned for live reports from the Indianapolis Open as LCCC has some players making the trip. Live tournament feeds are always fun to see.

The great chess (problem) composers led some interesting lives.
Wolfgang Pauly discovered a comet.
Alexei Troitsky was a Chief Forester in a remote Russian region.
Milan Vukcevic was nominated for the Nobel Peace Prize in chemistry.
Henri Rinck refined olive oil.
William Shipman was city clerk of Grand Rapids, Michigan.
And Otto Titusz Blathy of Hungary is considered the father of the electrical transformer and the alternating current electric motor.

Otto Blathy is also the "Crown Prince of Bizarre Chess Problems."
If you never heard of Blathy or if you hate chess problems - keep reading. He composed problems and studies for people who didn't care for either. 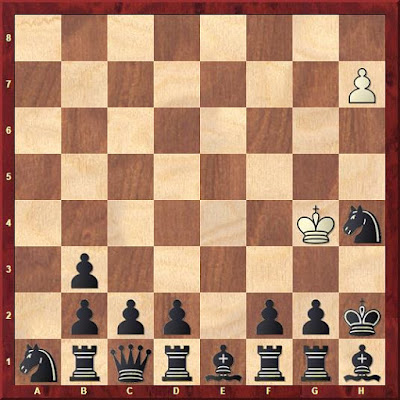 Take a look at this one.

Remember White is playing from the bottom of the diagram.

In other words it is White's move and he can promote on the next move.

White to checkmate in five moves!

If you don't - think about this:
My chess computer - Igor3000 - has been crunching away for 5 minutes and is 30-ply deep (60 half moves) and has not found the solution.

Elementary my dear Dr. Blathy for us humans. Elementary.
Posted by Nik Faldo at 2:56 PM No comments: 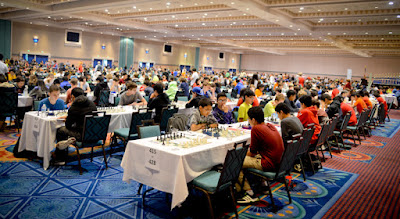 The Scholastic K-12 Super Nationals held their 20th tournament at the Gaylord Opryland Hotel in Nashville.

The record setting number of children (5,575) playing in this event shows that chess is alive and well with the newest generation in our nation.

Any why not! Its fun, inexpensive, every game is different and the benefits to minds - both young and old - are well documented.

As a matter of fact, there is a K-12 tournament on 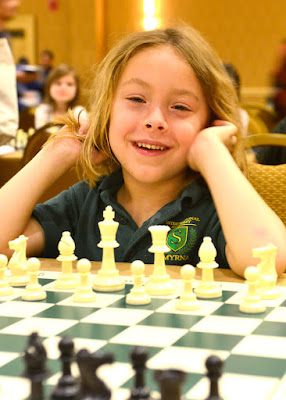 But there is a way to play chess with other kids for free.

Or kids can come in and get lessons on any aspect of the game - for free.

Stop on by with your younger chess players in tow to the Club this Monday at 6pm to 8pm.

Our club is open every Monday night except on holidays or when schools are closed for weather during the school year.

We don't have that issue in the summer.

Stop by any Monday for a fun evening of casual chess.

Or have a lesson or game review if you want one. There is always someone willing to help you.

Here is an interesting finish to a game played by members at the club: 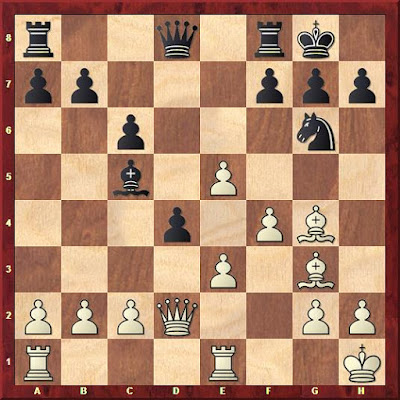 White is in control with the extra pawn, the bishop pair and better rook play available. Black has only a semi-passed pawn and a better pawn structure.

Holding for a draw seems to be in order. Trading off one of your assets is not a good plan.

White is up by +2.5 pawns at this juncture, by factoring in his positional clout also.

Too aggressive now by White without his queen, Bringing in more troops with 20. Rad1 was stronger. (White up +1.5).

White continues to attack without all of his army. 23. Rad1 is screaming to be played. White's lead is shrinking (+1) as we are positionally even.

This looks best for Black's position, but it gives White a tactical shot.
Black was looking at what move best helped his position and not at what his opponent might have in response to it.
This 'dropping of our guard' happens many times after just getting out of trouble. Sometimes after just getting out of a little fix, we step into a big one.
Needed was 23. ......Rad8 24. Rad1, c5 25. Rxd8, Bxd8 (+1.1 instead of +4.5 as it stands now.)