We had nine players at the club (moved to an alternate room) this evening.

We welcomed a new player - Patrick - to our club tonight. And a player we had not seen for a while - but Sam found our back-up room.

The exciting news for the Club has two parts:

One: FIDE Master Seth Homa will be at LCCC on Monday August 22nd to hold a simultaneous exhibition! It was a fun event a few years ago when he was here last time. Seth will take on all participants at the same time!

Seats will be $20 a board. Space is limited so sign up as soon as possible.

Two: The annual Fischer Random 960 tournament starts next week. We will hold a round every other week. Now the exciting thing about this tournament is the 'start' of the game.

The back rank pieces are randomly placed before the start of the game! This means that all the standard opening chess knowledge is useless! You have to start playing "chess" right from the first move!

If you have never played this style of chess before, here is your chance! Entry fee is free and the '960' rounds are only held every other week.

Be at the club by 6pm to be sure to get in this exciting event! 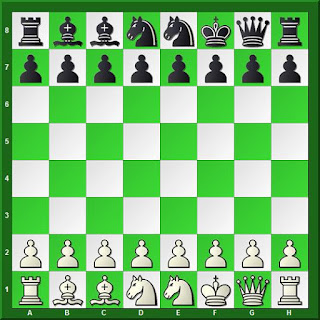 Just to give you an idea of what '960' action looks like, here is a game from this event two years ago:

The board has the back rank pieces in this layout from left to right: RBBNNKQR. Notice the King is still in between two rooks, so regular castling rules are still in effect. 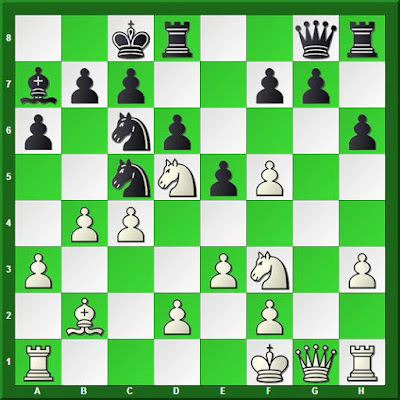 Black must have been painfully aware of this usually correct edict. But in some situations - and especially in 960 games, standard ideas don't always lead the way.

Black still likes the idea of attacking White's dark squared bishop, but the text allows him an escape square - and a better square to boot. White is now up (+1.5 - which is a pawn and a half positionally).

Black delays protecting his knight with ......e4. Sure he develops his sleeping queen, but White gets to make defensive moves that better is position at the same time. (+2.1)

Taking the f2 pawn now was a better plan for Black. Now White eyes the unguarded g6 square for his knight. Black's game is starting to unravel (+4.4).

Fischer 960 chess is a great way to play - what is already the best board game in the world. Be here Monday June 27 at 6pm to try it for yourself!

We had nine players find the temporary new room the Senior Center found for us.

The Hartland Senior Band took over our room for their Summer Concert Series for the next two weeks. In addition the Girls of Hartland Dance Club took over our back up room (where our equipment is stored!) as a dressing room. So we had only the equipment we brought.

What your humble scribe is trying to say is that we will be in Room 18 next week also. It is best to enter from the main entrance and park on that side (south side) at the front of the building. Walk straight thru the Main Entrance to the second right and we are the first room on the right.

Using our usual Senior Center entrance on the west side of the building will give you a long walk.

Signs were posted showing our location, but it was not the easiest thing to figure out.

We had two guests show up tonight and play. They are on their way to California to go to college and could not 'join' the Club at this time. That's still wonderful you stopped by for an evening of chess fun. We welcome you back when you are in town.

Due to the room change, our Tournament Director Ken T decided to delay the start of our Fischer Random 960 tournament by one week.

So it will be a 'casual' chess night next week with our 960 Tournament starting on June 27. This is always a fun event so be sure to enter next week or be here at 6pm to make sure to get registered on Tournament Start Night.

I leave you with a puzzle to figure out. Black to move and win!
Posted by Nik Faldo at 6:43 AM 2 comments:

Our Tournament Director - Ken Tack - not only ran the tournament, but won it also!

Scoring 3.5 points out of 4 and taking a clear 1st place! Nice job Ken!

Here are the rest of the results:
Luke S - 3 points

We welcomed a new player - Brennan - to the club. See you next week!

Next week is a Casual Chess night. But the following week starts our annual Fischer Random Tournament! This is another fun event. Be here for this.

An example of a Fischer 960 game is given here. Notes by Igor3000. The game started with this set up:

This FREE tournament is open to all players!

5 minute games! Who said chess was a slow game?

Four rounds - two games against each opponent - one game with White and one game with Black.
If you win two or win one and draw one - you win the match

Two draws or a win and a loss - draws the match.

Be here this Monday for this fun and exciting event!

In the meantime, here is a puzzle with two solutions. One is slightly faster than the other, but we will accept either answer.