Summer League May Be Over, But Exciting Chess is Still Possible at LCCC

We had a nice crowd of 17 players this Monday night. No League play, no tournament happening, but good chess still does.


Or you can step up to our always running Ladder Tournament. Start at the bottom and work your way up the rungs. Beat someone higher than you and move up – lose and you stay put, but the winner moves above you. It’s as easy a tournament as that.


We had action of all types tonight. We had some ladder games that will appear here later.

The big announcement is that LCCC will be running a Fischer 960 tournament soon. Be sure to sign up for it by email or on Monday nights at the club.

The tournament will probably be four rounds – and it will run every other week! This will give the players two weeks to get their game in.


Obviously vacations happen in the summer and you may miss a week. Hopefully the two week window to play the game will help with that.

In the meantime, here is a puzzle for you to enjoy. As usual, the answer will appear in the comments soon.

As it turned out, the league title did not have an exciting finish, but the battle for what they thought was for 3rd place, ended up going down to the wire AND ended up being for 2nd place! Now that was exciting.


This final team score tally of that match left the door open for either the Four Aces or Its Your Move to slip into second place with a commanding win in their own head to head match.


The Four Aces got it done with a 3 – 1 win over Its Your Move, with 2nd place alone being secured with a late, last game going win by Zach Romeos to push the point total to 11.


Here are the final standing for the Summer League:


Board 4 – Marcello Milani
Posted by Nik Faldo at 5:44 PM No comments:

Week 5 of the LCCC League – The Grand Finale Next Week!


Well we are set up for a great finish!


The Four Aces defeated the Unnamed Team 2.5 – 1.5 as a late draw on the 1st board clinched the win for the Aces.


Meanwhile, in the other match, it also came down to the last game to finish with the 300 Spartans winning 3 -1 and clinching at least a tie for the Summer League title!


Of course the 300 Spartans only need a drawn match to win the league outright. This is very exciting stuff. Stop by LCCC next Monday to watch all the action.


Games from Round 5 and 6 will be highlighted on this blog soon. Stay tuned.
Here is a puzzle and a tough one. Find the best move for Black.
The answer will be posted in the comment section later.
Posted by Nik Faldo at 10:44 PM 1 comment:

Round Four of the LCCC 2014 Summer League


Another exciting evening of league chess as twenty-two players were on hand for the action. Several casual games were played also.

But in League play;
The Red Dragons defeated the 1st place Gamma Rays 3 – 1 and that leaves the door open for 300 Spartans to take control of the league lead if they defeat the Gamma Rays next week! The 300 Spartans had a bye this week.

It’s Your Move defeated the Unnamed Team 3 – 1 and tying them with the Red Dragons for 3rd place. Two games in this match lasted the full 2 hours and both ended in hard fought draws. Well done players.

﻿﻿ Next week the Four Aces will play the Unnamed Team. A victory for the Aces will put them in sole possession of 2nd place, and the Aces have a match in hand!

The match of the week next week is 300 Spartans vs The Red Dragons. A must win for the Dragons and a possible league clincher for the Spartans!

Great excitement at LCCC. Stop by and be a part of it next Monday. Full League standings on the right side of the blog. 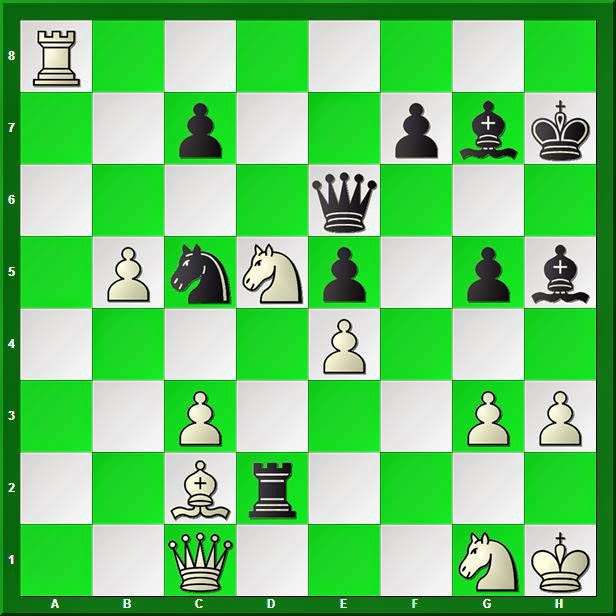 Here is a puzzle. Answer to be given in the comments in a few days.