Chess Every Monday at LCCC - and P. R. Geffe Conclusion

Just a reminder - the LCCC offers chess every Monday night at the Hartland Senior Center. Stop on in 6 - 9 pm.

After winning the California State Tournament, Woliston (Geffe) as he was know - was invited to play in the first US Chess Championship sponsored by the United States Chess Federation in New York City in 1940.

Prior to the tournament he visited all the local chess watering holes. He managed a draw with Reuben Fine in a casual 10 seconds a move game and lost a close game to Sammy Reshevsky. But the best thing about the trip was meeting back up with his old playing partner and friend Olaf Ulvestad.

Olaf failed to make the tournament in a tie-break scenario of a coin flip - giving the spot to Fred Reinfeld! But the old friends made the most of their time together as Olaf prepared Philip for the upcoming tournament.

But Woliston did not fare well against the bevy of international stars at this tournament. There was Reshevsky, Fine, Kashdan and Denker. After opening with a 2 - 1 result, back to back losses to Steiner and Fine, two draws and two more losses effectively ended his chances.

In the 17th round, Ruben Fine trailed Sammy Reshevesky by a 1/2 point as they sat down to play the final round. In inaccuracy by Fine on his 27th move completely threw away his winning position. It was the only real chance Fine would have in beating his life long nemesis in all the national events they would enter together. Woliston remembered, "When it was over, Fine looked crushed and almost ready to cry."

The attack on Pearl Harbor changed Woliston's fate, as it did so many other people. He enlisted in the Merchant Marines and became a radio officer. Having to use his actual birth certificate to enlist, his official name returned to Philip R. Geffe. Hence, this is why so much of his early chess career was lost for a quarter century or more.

After the war, chess took a back seat to life as Philip married and raised three children. It was not until 1965, twenty five years after his last tournament, did P. R. Geffe return to tournament chess.

Chess too, would come into play in his business life as well. "I went to work for Westinghouse Defense & Space Center in Baltimore, Maryland. My boss and the guy that hired me was Anatole Zverev, a Russian immigrant. We played chess at my employment interview."

Philip started playing again with some regularity and won the Maryland State title in the late 1960's. And in 1970, won the Nevada State Championship.

The first United States Chess Federation sponsored tournament was held in New York and was won by Sammy Reshevsky. There were 17 competitors. The last player living from that tournament - is not even listed on cross-table of the tournament.

Philip Reinhold Geffe was born on Oct. 22, 1920 in Napa, Cal. He was an only child. His parents moved to Seattle and divorced when he was still an infant. His father was a veteran of WWI, contracted tuberculosis during the war and died when Philip was 9 years old.

Somehow, Philip's last name was changed to his mother's maiden name of 'Woliston' when he started school.

The young Woliston came to chess relatively late in life, learning in Seattle's Franklin High School. "I learned quickly and was playing at the Seattle Chess Club by summer vacation in 1935. His playing strength was hastened by his playing partner and friend Olaf Ulvestad.

Not surprising; the young Woliston's play quickly developed. Philip states, "I moved up the Seattle Chess Club rating board from last to second in 4 months. Actually, they had two boards and I was 5th on the blindfold rankings."

Philip and his mother moved to California in 1936 but not before he played a match with J. Leonard Sheets - the nine time Washington State Champion. Woliston won the match 5 - 3 with one draw.

Woliston then won the California State Championship with a 7 - 1 score. Behind him in order was Harry Borochow, Herman Steiner and 4th was George Koltanowski!. That is how strong the field was.

Your humble scribe could not make it due to work commitments, but chess was still available on a cold and unpleasant evening.

Many chess sites like to show the games of Bobby Fischer. I try to go with his fellow world champion - Boris Spassky.

Here is a game where he calmly and with just classic chess play, disassemble a opening novelty by his opponent. 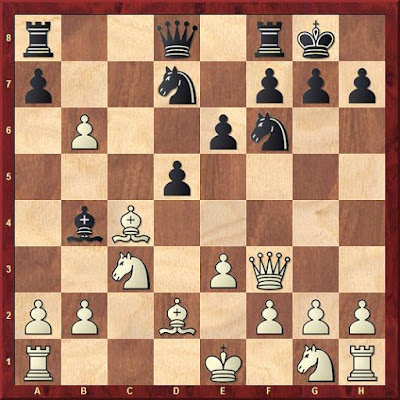 White draws the line here. Continuing to eat pawns would leave Spassky with an excellent game - which, by the way, he has anyway.
[Black with a two pawn positional lead (-2).

Eleven players were on hand for some chess. We were able to welcome back some players that had not been to the club in a while. It was good to see them again.

The wonder of a chess club is that when life allows and the mood for a game a chess hits, the Club is there like an oasis. Stop by sometime and rest yourself. Stay for a spell. 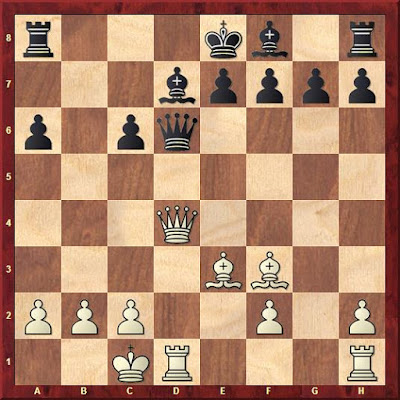 White to move - and gain a big advantage.

The cold and blistery weather may have hampered attendance. Your humble scribe had to work OT and could not even be at his favorite location on Monday night.

This game is not a classic, but it does ....indirectly......shows the beauty of chess. 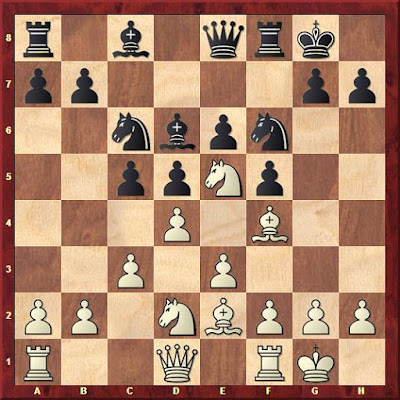 You cannot see it without a computer, but there has not been a "best move" made yet in this game. Matter of fact, many of the moves were not in the top 3. However, none of the moves were 'bad' and were actually less than (.2) of a pawn from the best move.

This is why chess is such a great game. No two games are ever the same.

White is up (.8) of a pawn, according to Igor3000. As a matter of fact, in this position, there are now 15 possible moves for White that do not destroy his current positional advantage.