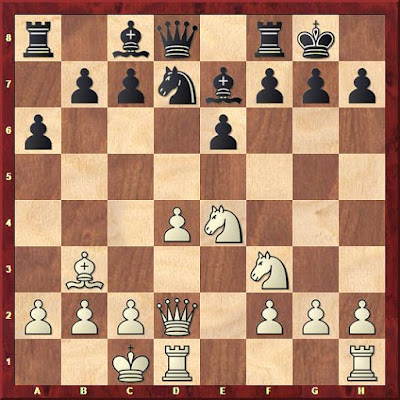 Nice numbers for two nice late summer nights. But the REAL chess season will be here soon. Hopefully we will see bigger crowds when it is more fun to be indoors than out.

The next Kid's Night will be Monday October 9th, 2017 - but everyone is welcome any Monday night for casual chess.

Now, for your enjoyment is a splendid game played in the 13th Chess Olympiad (2003) qualifying round.

John Edwards (2550) - playing White - needed a victory to move the United States on to the next round.

If - like most people - you skipped past the last note, don't worry. This game is more exciting than that note.


John Edwards has ice water in his veins. He rejects any move repetition silent draw offer from Black and presses on for a win in an even position - while down material! Black's position is cramped

In the BC (before computers) days of chess analysis, this move was given an (!) as a neat defensive play and the correct road to victory (+4.4 pawns up).

We have our regular Kids Night this coming Monday!

We had casual chess the last two Mondays also, and some of the kids attended those nights also. Everyone is welcome every Monday, but Monday #2 of each month is Kid's Night.

See you this Monday at 6pm!

Let's give you a puzzle to solve to prepare you for Monday: 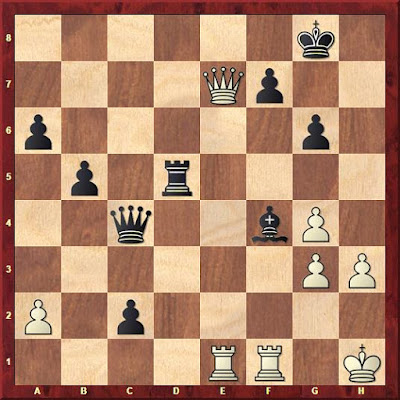 And as a bonus, we will give you a 'Correct' for either winning move.

One is much stronger than the other, but either will work.

Enjoy!
Posted by Nik Faldo at 1:55 PM No comments: