The LCCC tournament was over and it was just a scheduled casual night of chess on the Monday prior to the Memorial weekend.

We welcomed three new players to LCCC this evening. A big welcome to Brian G, Luke G and Alan M. Great to have you at here guys.

We also had two players that have been away stop by. First of all - Zade K was home for a visit from West Point. He was part of the Armed Forces chess team that played a 'friendly' match against a military team from Canada. The USA did win the match!

The other guy returning to the Club is Jason M. He left the USA for a long work assignment in Australia in software engineering. But the assignment is over and he is back. As the highest rated player in the Club, Jason jumped right in by going over the tournament games of some of the K-12 players of LCCC. Thanks Jason!

Now here is a game played at the club years ago by Scott M as White. It shows that the Kings Gambit is a dangerous opening for Black - even when Black correctly accepts the pawn offering at the right time. 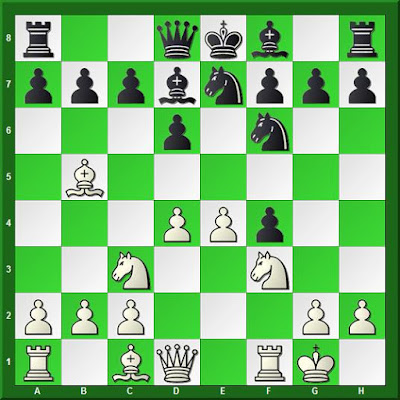 Vince went 5 - 0 as no one could stop him. Vince used his solid style with a touch of sneaky tactics to win his games. Nice job Vince.

The next event for the Club is a Speed (5 minute) tournament on Monday, June 6.  The tournament will start at 6:30 pm, so get there at 6pm to sign up! The plan is for 4 rounds - but each round will consist of two games against each opponent - one with White and one with Black.

Eight games played in the same evening! A lot of chess in a short period of time. Be sure to be here June 6th for the fun event.

Casual chess is on tap for May 23, and of course we will be closed on Memorial Day.

Here is a game between two GM's - Kacheishvili vs Wang, Dubai Open 2005. Computer - [Igor3000] comments are in brackets.

Here are the pairings for the final round of our tournament Monday, May 16.

See you all Monday night!


We had seven players on this spring night.....and it was a lot of fun.

Now the final round (round 5) will be this coming Monday - May 16 at 7pm. The club opens at 6pm. Come on by for some casual chess and either keep playing - or watch the final round action.

Your humble scribe would like to take a moment to thank our readers across the world! This blog passed the 50,000 mark in 'hits' and all of us at LCCC are humbled by that number!

Thank you to all our readers. This blog is truly international in scope - as is chess!
Nearly 40% of our readers are from outside the United States!
The other amazing stat is that almost 40 countries make up our readership.
The top countries - excluding the USA - are:

Again - thank you to all our readers!

Next post will include the final round pairings for our Club Championship and a game from the last round. Stay tuned!
Posted by Nik Faldo at 7:58 AM No comments:

We had thirteen players make an appearance this cool spring evening. Casual chess was played in addition to the 4th round of our Club Championship.

The winners were:
Vince V and Mike N

Drawing their games were Don J with Ken T and Dave K with John R.

One 4th round match remains with Gene M and Luke S to square off next Monday at 7pm.

The club will be open at 6pm for open chess. Stop by and get your chess on or watch the Tournament action.

Now for a  casual game played at the club. The moral of this game is that sometimes just playing chess fundamentals sets you up for a win.

7. c3      Be7
8. Nf3      O-O
The computer Grandmaster Igor3000 liked 8. Nh5 here, but we are not grandmasters. Leaving a knight on the rim and unprotected is generally not a good idea for us mere mortals. Castling here was not the 'best' move, but certainly not unwise or bad.

9. Nbd2     Re1
Another development move by Black. With no real plan in mind, Black prepares his army for battle.

15. Qb1?      ........
A blunder that loses a piece and position (-4.7). Yes, White blundered, but it is the developed Black pieces that allow the blunder to be taken advantage of. It is the norm rather than the exception - where solid chess moves eventually pay dividends.

Lesson: Develop your pieces and forego the early one or two piece attack. Get your entire army mobilized first.
Posted by Nik Faldo at 9:49 PM No comments: