This game was played at the Cadillac Open in early November of 1996. It was published in the Michigan Chess magazine in December of that year. The game was annotated by state chess legend and Michigan Chess Hall of Fame member David Moody.


Mr. Moody tirelessly and selfishly work as the Editor for Michigan Chess for many years and spent countless hours going over games played at every Michigan tournament and tournaments groups of Michigan players attended – such as a US Open or Midwest Class Championship.
David always did a great job commentating and analyzing the games – all without the aid of chess software I have to cheat with today. I miss his great writing style to this day. I had the thrill of having him annotate and publish a little over a half dozen of my games. They were mostly losses - but at least he deemed them print worthy, and that was a compliment in itself I felt.
I will let Mr. Moody take over the commentary on this game. Any comments I add will be in [brackets]. Enjoy.

The winners for the Tigers were Vince V, Paul M and Luigi M. For the 49’ers it was Marcello M winning


The winners for the Thunder were Luke S and Zack R. Ted G won for the Oilers. Tim R and Gene M drew their match.
The standings are:


Next week is still a league night! Don’t forget.


The schedule for November 3 and line up is:


49’ers vs Oilers
W) Mike N 0 vs Tim R 1 (already played)
B) Dave S vs Sam T
W) Americo M 1 vs Tom H 0 (forfeit)
B) Marcello vs Ted G
Tigers vs Thunder
W) Vince V vs Gene M
B) Paul M vs Luke S
W) Luigi M vs Zach R
B) Luca M vs Zach K
It will be another fun night of chess action. As you can see, there will be a few players with no opponents and besides, there are usually a few players there for casual chess. Stop on by to watch the action or play yourself. We open at and the league starts at .


And it looks like there is interest in starting our Thursday night chess at Teekos Tea and Coffee House at the northeast corner of and in Howell. We will see if our private room is still available. If not or if not the first week, there is still plenty of space in the main coffee shop. Stop on by.


Here is a tactical shot from the 103rd US Open. Paul Shannon vs Alex Lewis – White to play and win material …or more. Find the best move or moves.
Posted by Nik Faldo at 8:03 PM No comments:

Another fun night at LCCC. Some chess lessons were given and alot of friendly games played. We had nine in attendance on this rainy Monday night.

A reminder, our league night returns next week starting at 7pm. But we will be there at 6pm to welcome new players and play some warm up games!

Here is game from our league's top boards. A very interesting back and forth battle. Proof that we are all just a friendly club, this League Game was played early - on an off night - just so one of the players would not forfiet because of work travel.

Not only that - both players were willing to re-hash the game and share their good move AND blunders - in order to help teach other players in the club. Thank you both Tim and Gene for your effort and sportsmanship. On to the action!


Gene - Tim informed me after the game this is the Blackmar-Diemer Gambit.


Tim – Yes, this move typically is a waste of tempo, since most of the time it is retreated to support  Bf6.


Tim – Bxc3 allows my attack to prosper, really not a good move for black.


Gene - White is much better +-4.1. I’d underestimated the added pressure his Rook on the f file exerted on my f6 Knight.


Tim – There is a consistent theme in the match to recognize critical positions, and in this one I played hastily, afterwards realizing that N can recapture, I immediately recognize the mistake.  Rook or bishop capture is significant and most likely fatal.  The lesson for young players is to forget about the past position and play the one you have!


…gxh6?? the pressure is too much, Black crumbles


Gene - Tim thought for 20 minutes before playing 18.Re3.  He said after the game he was trying to keep my King from escaping.


Tim – All the natural moves were bad.  Qxp has no good follow, and I thought a long time, trying to find a solution to either position.  My first instinct was Bg6 but I thought I couldn’t calculate the queen move or R pin (and eventual bishop escape) and it just looked like chaos and I’m a piece for 2 pawns down.  As I said before I was irritated that I overlooked the win, and failed to come up with a sufficient “next” plan.
{Igor says "We computers have no such handicap."} 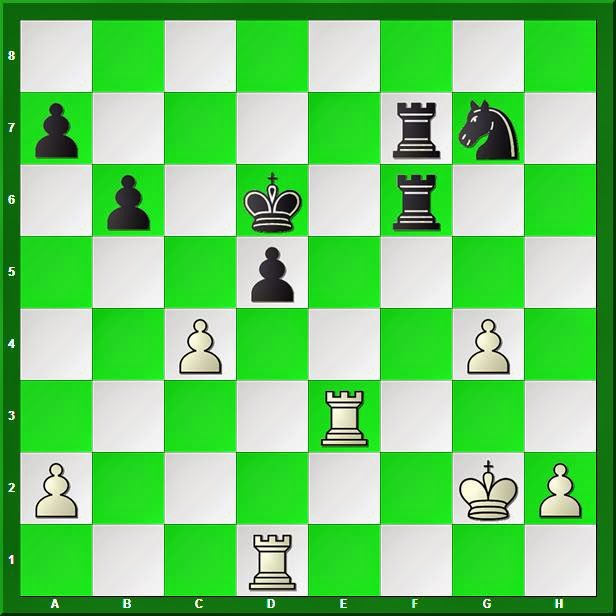 
Tim – Ra3 was ONLY to create complications


Tim – Was happy you went down this path.


Gene - Tim had a winning position (+-6.8 here) but under a minute on his clock.  The game ended after about 55 moves with his Queen and King pushing my lone King into a corner before his time expired.


Tim – The last 20 moves were in severe time pressure, I was trying to create complications till he mistook the b pawn push and allowed the Rook exchange, then I knew I was winning, however, had no time to convert.  Fun Game.  ½-½
Posted by Nik Faldo at 10:43 PM No comments:


We had fifteen players on this Monday night. Two league games played and the first round closed out. The standings are on the right side of the blog.

Also a lot of friendly games were played. It was a nice evening of chess.
The next round of the league on October 29, features these match-ups (first name listed has White):
49’ers vs Tigers

Lots of casual games, a Ladder Tournament game, some lessons and even some Bughouse chess!


If you don’t know what Bughouse Chess is, normal chess rules apply – except pieces captured on one board can be passed to your teammate on another board and vice versa. The teammate has the option to add the piece to his game. The game is usually played at a fast time control to increase the excitement. Try it at LCCC!


Our league will resume on Oct. 27 – so there is open chess on Monday until then.


As promised earlier is the top game of the League play last week. Vince V vs Tim R. Enjoy.


Wasting a move, giving White recovery time. Correct for Black was the eventual Qa5. Correct for White now is 14. Bd3 and the game is virtually even. Instead, Black’s advantage stays at (-.7).