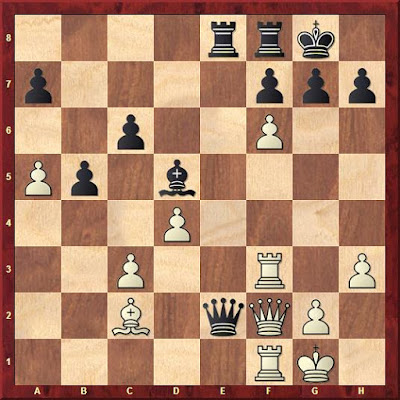 Have a go at this one.

White to move and win material.
Posted by Nik Faldo at 12:26 PM No comments:


The Action Tournament was completed tonight and we had a 3 - way tie for 1st place!

They all finished with a 2.5 out of 4 record. Congratulations to the three of you.

Casual chess will be on the calendar for the rest of February and March. Stop by for some chess fun.

Here are a couple puzzles for your enjoyment!

We had open chess this week and it was a nice evening of chess and conversation.

Next week our Action Tournament will be concluded. But don't worry if you are looking for an opponent or a lesson. There are always other members around to offer either.

Here we have an entertaining game from our Action Tournament. Now this is a tournament in which each player has 30 minutes on his clock. This faster time limit usually leads to exciting games, with plenty of errors [according to the computer Grandmaster Igor3000], especially near the end of the game.

But those small errors do not mean the game was not well played or very spirited. This game was both!


We had another fun night of chess at LCCC.

We had tournament action to watch. We had casual games played. We had chess lessons given. We had ten players tonight to enjoy it all.

Now for a puzzle clipped from a newspaper.

It is a newspaper from Sweden.

Enjoy - and no using engines. Solution will be placed in the comment section - probably by Dr. Morris.

Nine players ventured to LCCC on a cold Monday night and a warm chess atmosphere was found. Even Swen found his way back to the Club after missing a few sessions. Welcome back Swen.

Next week Round 3 of our Action Tournament continues. But don't worry, there will still be players around for casual chess and / or chess lessons or game reviews.

See you next Monday at 6pm - and tournament action will start by 7pm.

Now for a treat from the "Never Ever Give Up!" department.
This game was called "The Swindle of the Century!"

Two American Grandmasters played each other in the Dubrovnik Tournament in 1950. It was Larry Evans with White and Sammy Reshevsky with Black.

As you can see, Black is one move away from delivering checkmate. White can stop checkmate with Rxg7+, but after Qxg7 White is down a rook and knight for a pawn and really is in no condition to continue the game.

But GM Evans found the Swindle of the Century to take the victory away from a stunned GM Reshevsky.

Can you find it?