A nice night of chess this evening with ten participants.

The annual Club Officers Meeting will be held this Wednesday Night. The meeting minutes will be shared with the Club on this blog after that meeting.

Without further adieu, here is the latest Club Events update:

Livingston County Chess Club Events and News
We will play 3 or 4 rounds - depending on the number of entries.
Sorry for the wrong information on the original post.

Kid’s Night on April 8th.
Rules are available by the sign in sheet.
You simply look at who is in attendance that is above you on the Ladder and challenge them to a game! If you win, you move to the space above them. If you draw, you move to the space below them. If you lose, you stay where you are! It’s just a fun little motivation to have when playing your casual games! Ladder Rules will be available at the Club!

To become a “Regular” Member of the Club, dues are $20 per year. This entitles the Member to run for any office for the Club (President, Vice-President, Treasurer, Secretary or Tournament Director). A Regular Member also can attend any Board Meeting of the Officers. The time and place of any Baord meeting will be given to the Regular Members ahead of time.
All Club dues collected are used for Club supplies, advertising and event hosting – such as simultaneous exhibitions or lectures by Masters or other higher caliber players that may require an appearance fee.

Voting for officers is done by a Regular Member writing their selections on an index card supplied by the Club and placing it in an envelope also supplied by the club. The member simply marks the envelope with a “V” to show it is a vote envelope, and drops it in the Club Senior Center Collection cigar box.

Another fun night of chess was had by all. We had seven of the younger chess players and nine older players.

Casual chess is on the horizon for the next few weeks, so come on in and play in a friendly, relaxed atmosphere. 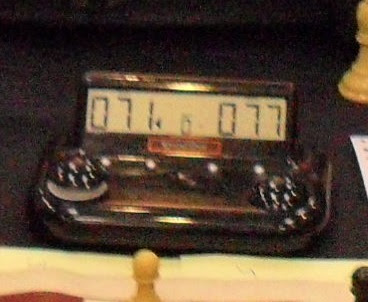 Now for a little chess clock history compliments of the late great GM Larry Evans, with some commentary from your humble scribe:

The chess clock did not exist at the first international tournament in 1851. Howard Staunton, who invented the now standard design for chess sets, groused when his opponents took forever thinking about each move.
A year later, in a match between Harrwitz and Lowenthal a time limit of 29 minutes per move was established. Then in 1862, in a match between Anderson and Kolisch, hourglasses were used that gave each player 2 hours for 24 moves.
The now standard double chess clock made its debut in London in 1883. Each side had an hour for 15 moves and clocks then became a fixture for any serious chess match or tournament.
Time limits got tighter and tighter, and today with the better clock designs, we have a bevy of tournament time controls available.
Most serious tournaments have a time limit of around 40 moves in 2 hours. Then 30 moves in an hour and then 30 minutes sudden death. Sometimes the 30 in an hour is removed as a second time control and you go right to a sudden death time control.
The belief is to keep any serious game to 7 hours maximum, as the general rule.
Newer clocks even allow for a "delay" where you maybe set a 5 second interval (although delays can be set for whatever can be agreed upon, but 5 seconds is standard) that runs BEFORE your main time starts running down to at least give you the opportunity to move before losing on time.
There is also something called the "increment" option where a set amount of time is added to your clock after each move. This give a player "credit" for moving. Of course players take advantage of this feature by maybe moving their pieces back and forth twice on the same squares to add a minute to their clocks. GM games have gone over 100 moves with much more frequency now due to that option.
Obviously shorter time controls lowers the quality of the chess game, but idly sitting while a game drags on is no good for the player or any spectator.
Time control for casual games are up to the two players.
For a point of reference, chess games 1 minute to 5 minutes are called Blitz chess. 6 to 15  minutes are called Rapid Chess. 15 minutes to 30 minutes is called Quick Chess.
So now chess has not only it's own special greatness, but you can also play it at any speed you desire - including no clock at all.
But in your scribe's opinion, playing chess with a clock is what makes you a real chess player. 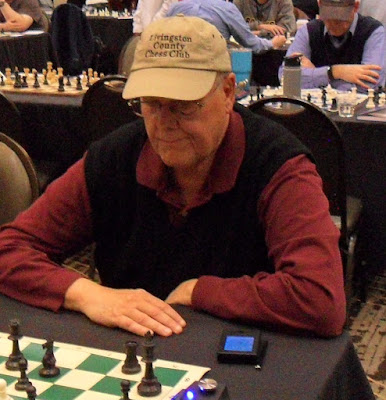