LCCC is Back Playing Chess Live! Stop By! Oh, And Drawing Conclusions 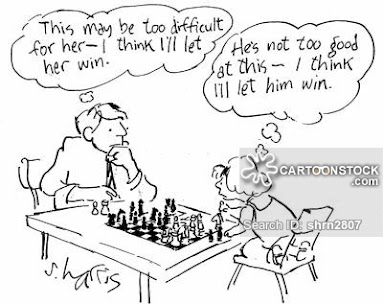 Another successful chess evening at the Buffalo Wild Wings in Brighton, Michigan at the Green Oak Village Place Mall. We started at 4pm and by the 7pm had 8 players involved in 4 games! Not a bad number for our 3rd attempt at starting live chess back up. We concluded around 9pm.

Our opening night brought us 11 players. We had 8 players two weeks ago. And 8 this Monday night.

Our old location is still closed due to COVID concerns, so here we are at the Buffalo Wild Wings. Officially, we are not meeting there. Unofficially, a bunch of chess players are showing up, eating some wings and playing chess at the same time.

We will try it again on Monday March 29th at 4pm until whenever! Stop on by.

Here part of an article by GM Andrew Soltis, paraphrased by your humble scribe. He is talking about draws - the alleged scourge of chess.

"We want our chess stars to play until it is King vs King, but we often seeing them shaking hands when there are still 30 pieces left on the board. You cannot force someone to play, but you can discourage draws. There have been many attempts at this by tournament organizers.

At Groningen in 1998, each GM was assigned an amount of money equivalent to his rating. For each win, the GM got 10% of your opponent's rating you collected in money and you lost the same 10% of your rating was lost. Good idea? No horrible. Since there was in fact no real prizes per se, there were only 6 win out of 30 games (20% verses the usual 33% to 45%).

Another try was to demand a replay. In a tournament in Paris 1900, the idea was that after a draw, there had to be a replay. The drawn game would not count. Good idea? No. It effectively gave the better player two chances to beat the lesser player.

They tried it again, but with a quarter point being issued to both players, with a replay for the remaining 1/2 point. Though better, it still left the stronger player with an edge and the choice to play for the 1/2 point or basically gentleman draw for the 1/4 point. Now your tournament draw of opponents became a little too relevant in the outcome of a tournament.

The most extreme anti-draw format was used in Paris in 1867. Draws were not replayed, they were ignored! It was like the game never took place! The problem with this became apparent near the end of the tournament, where the best players had to play reckless just to try and earn a win in a drawn position.  Otherwise they might lose too much ground to whoever was leading the tournament. The result was the lower rated players seemed to earn as many points as the better players later in the tournament, as the stars had to 'roll the dice'. [Ed. Note: It could also lead the way to some 'cash for a blunder' type situation. Not good]

What all this suggests is that we cannot abolish draws. But what about abolishing draws by 'agreement'.  The tradition of 'agreement draws' seems to have developed as a way for GM's to save energy in tournaments at different times during the tournament for various reasons.

This was tried in 2005 in the M-Tel super-tournament in Sophia. Draws could not be offered - only claimed due to rules."

The other 5 rules for a draw in chess - besides agreement - include:

2. Insufficient material for mate - neither side has enough material to checkmate the opponent.

3. Perpetual check - the king cannot get out of check, but cannot be checkmated either. Sometimes a person will use perpetual check to save a losing position because if he does not keep checking his opponents king, he will lose.

4. Stalemate - this is where the person who's move it is has no legal move but is not in check.

5. Same position or Three move rule - Here is when the same position has occurred in the game 3 times. This usually happens when opponents simply repeat the same moves 3 consecutive times.

Well, guess which one of these rules did the GM's chose instead of an agreement or making a draw offer?

Yes, you guessed it. Some pre-arranged signal was given and the GM's simply repeated moves 3 times!

So draws are here to stay. And along with the slowness of play and the difficulty for most to follow a chess game, chess will never be a TV ratings smash.

But this writer does not care. Who needs TV? We already know chess is the best game in the world.