Read about a true 'grinder' in the chess world in the last post - Igor Ivanov. Here is presented one of his best games. Enjoy.

Here is an example of Igor Ivanov’s moments of fame.

[Bracketed notes are from Igor3000]

Regular notes are from Igor Ivanov!

Otherwise after 12. f4 Black will have no compensation for his weakened kingside.

I was not filled with optimism. I would have been content if Karpov would have given perpetual check (draw). The world champion’s decision is easily understood, but with his next move White completes his development, while the Black King is not safely placed. [last ‘book’ move is #17 for White]

This loosens up coordination between Black’s pieces and therefore I decide to play actively. After 18. O-O White would be wise to limit himself to the more modest 19. Ref1.

The bishop on b7 is very strong and in order to initiate successful maneuvers on the queenside, I decided to sacrifice my rook for it. The decision to sacrifice was made much more easily because White doesn’t really have much else to do. 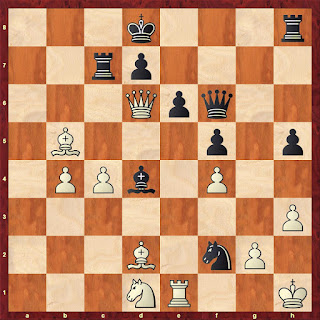 Black’s troubles grow. I feel that I this position White, without great risk, can attempt to create bigger threats. First a threat, then a double-threat that cannot be neutralized. For the first time in the game, I felt I might win!

I made a mistake! Everyone knows you must keep your composure until the very end, but not many of us actually do. After 36. Rxe6, Kf7 37. Re2  the rook on c7 is out of play and White wins easily.

I realized what I had done and felt just awful. But I calmed myself with the thought that my 36th move was payment for his 33rd move.

After this I have my win! Correct was 38. …..h4 and White can choose between two paths to a draw.