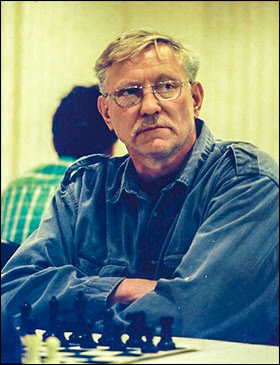 Igor Ivanov passed away November 17, 2005 at the much too early age of 58. Born in St. Petersburg Russia, he found his way to his final home in St. George, Utah.

He learned to play chess from his mother at age 5. At age 8, he was already an accomplished player, attending the Chess Palace daily with the other most promising young Russian talent.

His mother tried to discourage chess and pushed playing the piano on Igor. This may have hindered his future development. He studied mathematics at the University of Leningrad, but soon left to become a professional chess player. His first job was to represent Tajikistan, but stayed only for a year before moving to Uzbekistan to play 1st board for them. It was here that he first gained world attention by defeating reigning World Champion Anatoly Karpov in 1979.

Ivanov went on to win several tournaments throughout the Soviet Union. These results earned him his first trip abroad to play in the Capablanca Memorial in Cuba in 1980. On the return flight home, the plane stopped in Newfoundland, Canada where Ivanov asked for and received political asylum.

The increase in personal freedom was tempered by the lack of economic security. In the USSR, Igor was well off. In the chess barren land of Canada, trying to earn a living with chess was a challenge. Playing in our North America weekend Swiss tournaments was a far cry from the 16 player round robin format back in Europe.

Igor settled in Montreal, learned French and English, and then with home grown Kevin Spraggett, would dominate Canadian chess for the next decade. He represented Canada on first or second board in the 1980’s.

But money still needed to be made, so Spraggett moved to Europe and Igor to the United States. He hit the road across the USA and by 1997 had won 9 US Grand Prix titles (think FedEx Cup for golf) in 11 years! Where you might get 6 points for a tournament win, Igor would rack up close to 500 points every single year! That does not leave many weekends off, and he spent many a week driving cross country.

In the late 1990’s he turned more of his attention to coaching. He was the Grandmaster in Residence at the St. George Chess School and lived in the mountains of southern Utah.

A month after Igor’s death IM John Donaldson wrote a tribute to Ivanov for Chess-Base Magazine. He estimates that Igor played over 7000 games in his career annotating very few and keeping almost none of them.

We will have his victory over Anatoly Karpov in our next article.