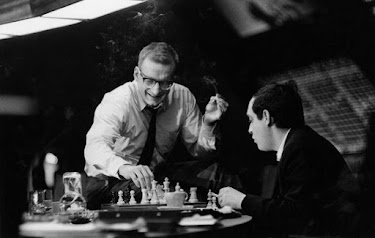 Another great evening of chess at the Buffalo Wild Wings in Brighton, MI. Twelve players were present and the LCCC 2021 Club Championship continued.

Feel free to stop by for some casual chess as, not only can you play before and after the tournament games are done, but not all our members are in the tournament. So you can find a casual game anyway!

Here are the pairings for the last round of action. The first player listed has the White pieces:

Now for a pretty endgame:

Your humble scribe made the decision to stop putting games on this blog. The reason is that you can find annotated games anywhere – either on-line or in books and magazines. Me reviewing a game on this blog, probably gets almost as little attention than me walking into a singles bar.

Ok, more attention than that, but my point is, the article will not get much attention.

But I found this endgame and thought it was worthy of noting. It is noteworthy because it shows the absolute beauty of chess.

White is ahead in material, but his King is woefully out of play having unsuccessfully attempted to protect a pawn into a new queen. White has issues in attempting to stop Black’s h-pawn from queening.

The White Knight cannot get there fast enough. Do you have the bishop play guard duty at the expense of the knight and the b-pawn, or are there other options?

Let us investigate with the help of Igor3000 as we review Grandmaster Max Euwe’s style and amount of correctness in the face of our Super Grandmaster Igor3000's computer chip analysis. Oh, and mine. 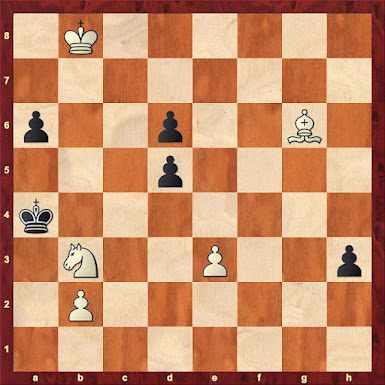 GM and Doctor of Mathematics Euwe makes the correct play. I would have played Bh5. Just sayin. White is winning after Euwe’s move by the equivalent of 6.5 pawns.

Black, shall go nameless because I do not know who it was. But he was one of the many excellent chess players of that era who never got the recognition they deserved. Much like the writers of chess blogs, who toil in anonymity, long hours, for no pay! These bloggers should be heralded from the highest mountain and……..sorry. Back to the game.

Igor3000 says that 2. …..  Kb4 was much better. A blunder which makes Max’s job easier. Igor’s move puts Black down 7 pawns as opposed to the 14 pawns he is down with the text move.

I am sure the Doctor would not have a problem with a blogger of my stature calling him Max. Just sayin.

Black errors again, but who can blame him? Queening the pawn looks like the only move for humans. Igor says Kb6 was best but still leaves Black down 16 pawns. I would get the queen also. Maybe my opponent blunders. Get the bullets while you can if you are losing. Maybe you will get the chance to use them.

The final nail in the coffin for Black as he walks into a mate in two. Both Qa1 or Qe1 prolong the fight to a mate in 20. If that means anything.

Why bother stopping the pawn when you can mate your opponent instead? An amazing finish!