Writing Down Your Moves or “Keeping Score” in a Chess Game 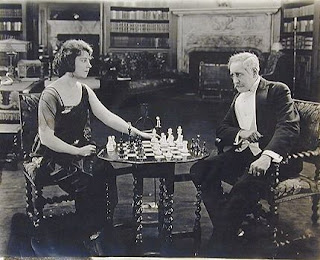 Even your evening game with your significant other may produce a gem!

In your scribe’s never humble opinion, you are not a true chess player if you are not recording every non-speed chess game you play. It is a requirement in most chess tournaments. If it is not a requirement, and you do not record your moves, if any dispute arises in the game, you will not have a leg to stand on. The person with any documentation - wins!

The real benefit of recording your games is that you can have a record of the game and you can re-play it! The best way to learn is to go over your games and especially the losses! It may be difficult mentally to review a loss with the tournament player who just beat you, but it is absolutely the best way to learn.

If you have never done it, it is an eye opener. The times I have been able to review a game with my opponent – win or lose – it has always been beneficial. Your opponent will tell you things about the game that you were not aware of and did not see. Many, and I mean many times your opponent blocked an attack you never knew you had. And after a win, he may bemoan your ‘great’ move of blocking a winning combination of his – that you never saw either! You just made the right move by accident! How is that for deflating you and keeping you humble after a win?

And of course now with the computer software available, you can load your game in and really see who was winning when, and how strong your opening was. To play serious chess, you need to record all of your semi-serious / serious games. You never know when a gem will be played. Many times I have played a ‘friendly’ game, that turned out to be very interesting or exciting. But alas, it was lost forever.

The official rules of chess had been changed regarding when you can write your move down on the scoresheet.

It used to be a crutch habit of some players to record the move they were planning on making onto the scoresheet and then take one more look at the board before actually moving!

The idea behind this was first - for some reason after the decision to make a certain move has been made, psychologically, it frees the mind up to see the board more clearly with the new position. The idea being you ‘made’ your move. Now what? And many times, players would see the problem with their chosen move - at this time - and then change their move.

The other reason, which grandmasters often tried to use, was to look at their opponent’s reaction to the move written on the scoresheet. The written move was not binding. So the quick glance to your scoresheet by your opponent - followed immediately by a quick glance by you at him - might give you an insight as to what he thinks of your move.

BUT THE RULE CHANGE ELIMINATES THIS TACTIC!

You can only record your move AFTER you have completed your move. Any move written down prior to you moving will be deemed a “note” on the scoresheet, which are illegal of course.

The reason for this RULE CHANGE is based on the fact that a player could have an accomplice that could read the move written and give a signal as to whether it was a good move or not. And, if that accomplice is wired to some chess engine somewhere, it would be a huge advantage. So to greatly reduce the chance of that type of cheating, pre-writing of your move was banned.

But for every action, there is an equal and opposite reaction. And for every change, there are positive and negatives. What about the following scenario? This occurred in an actual team tournament game in 1944. No clocks were being used.  I will let the player, Victor Trailbush recall the event:

“I pushed my pawn to the 8th rank. But before I could promote my piece, my opponent moved his queen and said ‘check’. I said, “No, you are in check!” and placed a knight on my promotion square. My opponent started to argue that I was going to promote to a queen. I then showed him my scoresheet where I had written, ‘e8 = N+.’ Discussion over and problem avoided.”

The pre-written move prevented an issue.

The use of chess clocks would have avoided this situation also, as would waiting until your opponent finishes his move. But the point is you just can never foresee all possible scenarios for rule changes.