The Smith-Morra Gambit in the Sicilian Defense

The Smith-Morra Gambit for White from the Black's Sicilian Defense opening gives White lasting pressure and piece activity in exchange for a pawn or two. Here are two 1900 players going at it in the Vermont Open, 4th round, 2005. 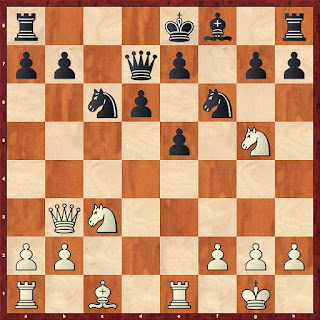 This is the last book move....following the script he knows for this opening. But Igor says White is down -1.5 pawns. He is waiting for his opponent to crack under the strain of a worse position. Black is up material granted, but his extra pawns are doubled, his King is not castled and his black-squared bishop is still unemployed.

Here is the opponent slip up that White was hoping for. We don't know the clock situation here, but it would be safe to say Black is searching for the right move, while White is peeling off his book moves much faster. Don't underestimate the clock pressure the gambit accepter is probably under as another negative besides positional. White is now up (+1).