Curious Chess Facts - and a Lesson in General Piece Placement 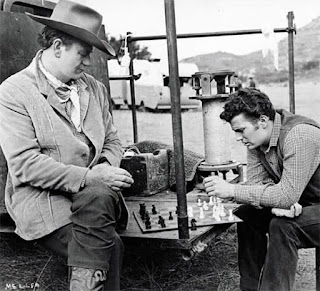 Chess is a big pastime between takes during movie scenes.

Here are some interesting chess happenings in the past:

·       The longest game was played between O. Duras and D. Janowsky in the San Sabastian Tournament in 1911 and consisted of 161 moves.

·       In the Bad Kissingen Tournament in 1928, Spielmann won only one game – but it was against Capablanca!

·       In a match between Richard Reti and Max Euwe, Reti sacrificed two rooks in one game and then the next game, did it again. He won both games!

·       In a cable match between England and the USA in 1900, Bellingham sent his message “Resign” at the exact moment his opponent sent his “Draw?”.

·       Dr. Tarrasch was the only player in the field to oppose F. D. Yates as an entry into the tournament on the grounds he was not a strong enough player. F. D. Yates did in fact win only one game the entire tournament….against Dr. Tarrasch.

·       Besides your humble scribe, Carl Schlechter was considered the player that drew the most tournament and match games in the history of chess. Needing only a draw in the last game of the match to wrestle the World Championship crown away from Dr. Lasker….he lost!

Now for a typical blunder-fest by non-grandmasters. But some lessons are contained within: 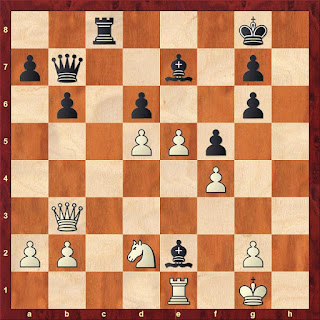 The position and material is even after the capture of the bishop on e2.

A less than worthless check as it wastes a move (a tempo). It drives the White King to a square he wanted to move to anyway - Kf2. Better was 24. ...... Rc5, putting pressure on White's strong center pawns. White takes a move advantage (+.3) of a pawn.

Wrong square! Back to even. =

A waste of time (another tempo) and allowing 26. Nf3 for nothing, that solidifies White's center advantage (+.8). See how the waste of moves adds up as an advantage for your opponent?

"To take is a mistake" - an old chess adage. In this case here, its true. White isolates his d and f pawns for no gain at all. Nf3 as a prep move was still correct. The knight is useless where it sits. The position is even = again after the next move.

Wrong square, as previously mentioned. White had a blind spot against placing that knight on what usually is one of the best squares on the board for a knight. White's position collapses now (-5).