Writer's Dilemma - and a Ten Year Old Beats a Grandmaster!

I must apologize to my readers for the long gap between posts. I have been at a loss as to what to write about.

I think that general articles of interest are the most appreciated, since game analysis and puzzles can be reviewed in various magazines, books, videos and internet streams. Who wants to set up a board to follow along on a game on a blog post? I hope all of you, but I am not sure that is the case.

However, the games I do post I found interesting or entertaining for some reason or I would not have posted them. But they take a much longer time to produce and the readership for those is actually a lot less. I sense a kind of a diminishing return; e.i., the more work and time I put into a certain post, the less it is read and enjoyed.

A personal interest story or a short general lesson seems to be the most read posts. A dilemma for your chess scribe to be sure.

But here is a game I found which I think deserves a look. A 10-year old player Abhimanyu Mishra (2353) defeats the Grandmaster Yaroslav Zherebukh (2695) with White.

We pick the game up at the critical point where little Mishra has played positionally brilliant so far, but is he starting to crack under the pressure of his GM opponent? 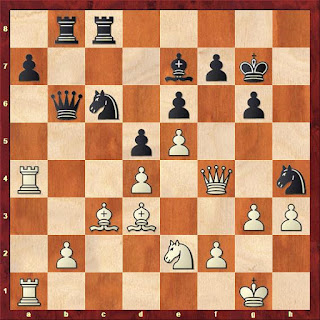 White has just played 32. g3? The correct move was 32. b4. This cuts Abhimanyu’s positional advantage in half to just a pawn (+1).

Let’s see if this starts a decline of concentration for this young man.

Black has lost his desire at this point and the youngster does not let the GM get away.