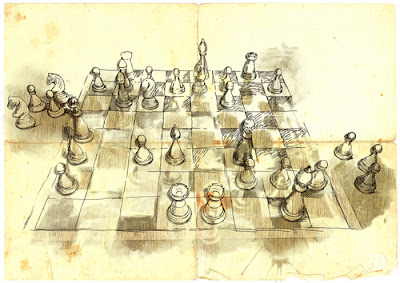 This coming Monday is Kid's Night at the chess Club. It is the night once a month where we focus on the younger chess players.
Bring your aspiring Grandmaster to the club for friendly games with players more his age, or against more seasoned opponents. Or maybe your child wants a chess lesson. Either way, the club is here for you every Monday night. But especially on Kid's Night.


Let’s check your chess ethics shall we?

Problem I – You are a spectator at the last round of a weekend Swiss tournament. The pairings go up and you see Player A – a friend of yours – is paired with Player B. You suggest what opening he should play. Is there anything wrong with that?

A no-brainer right? Not a problem. Your friend can take your advice or ignore it. Ok, let’s tweak it a bit.

Problem II – You are not a spectator but playing in the tournament. If Player B loses, you get a prize. You don’t know Player A very well.

Should you give him opening advice if he asks you?

Should you offer the advice if he doesn’t?

It’s getting a little troublesome now.

Problem III – It’s very late in the last round of a major tournament. The A vs B game is adjourned by the tournament director and the two players will resume playing in the morning. You want that prize so you go uninvited to Player A’s hotel room and offer to study the position with him.

This situation actually happened in the 1962 Candidate’s Tournament to determine who would play Mikhail Botvinnik for the World Championship. Paul Keres was tied with Tigran Petrosian in 1st place with one round to go. Petrosian drew his game and Keres would pass him with a victory over Pal Benko. The Benko-Keres game was adjourned until the next day.

That evening Petrosian and his friend GM Yefim Geller went up to Benko’s hotel room and offered to help analyze the position. Benko was disgusted and told them to leave.

The game resumed in the morning, Keres lost, Petrosian was crowned the Candidate and he went on to defeat Botvinnik for the title.

Like most people, your humble scribe was offended by Petrosian and Geller’s actions, and was very proud of my fellow American Pal Benko. The thinking is no third party should provide help. However, at the world class level, when games were adjourned, it was considered normal.

Let’s put a human face on it like Problem II. What if Keres best friend GM Max Euwe had gone to Keres room to help him?

So let’s ask an expert in Ethics studies, who is also an international chess player – IM Dr. Stuart Rachels.

The verdict is that despite their dubious motives, Petrosian and Geller did nothing wrong. As Dr. Rachels puts it, saying that Petrosian and Geller acted for bad reasons is not exactly to say that what they did was wrong – because the same thing, if done for different reasons, could have been just fine.