“Now there is no excuse for Black not to play ….b6, as he is running out of chances to stop White’s queen-side advance.

The main thing to point out is that Black is playing very passively and allowing White to take even more initiative. Black will soon find himself with no counter-play on the queenside, having to defend weak pawns.

Consider this: If it was really this easy to get an advantage with White in the Queen’s Gambit Declined line, why do so many grandmasters play it as Black? 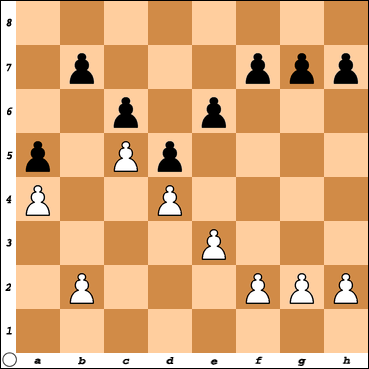 To understand why Qb8 is dubious, let’s take all the pieces off the board and look at the pawn structure. Surprisingly, we’ll find that White is somewhat worse off here.

In a book by GM Andy Soltis, he discusses the importance of studying chess in terms of basic pawn structures. In that book, he pays particular attention to “levers”. Levers are pawn moves that open lines for pieces.

What levers does Black have? What are his plans? First, he must strive to create a backward pawn at d4 by playing e5 and then exd4. If allowed, this is a permanent weakness for White that will not go away. In addition, the snipe at c5 is STILL there with b6! And since White can no longer play b4, he has to capture at b6 or allow a permanent pawn weakness at c5. After this, Black still has another round in the chamber with c5!, hitting d4 again.

Meanwhile, White cannot counter in the center with f3 and e4 because after dxe4 and fxe4, White has a permanent weakness on d4. 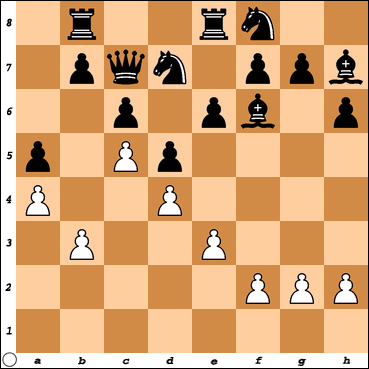 Now let’s add the pieces back to the game. The diagram here shows the ideal placement for Black. The rooks are connected, the Queen at c7 supports both b6 and e5 and guards a5. The Knight at f8 is ready to join in the fight after e5 and then Nfe6.

So, after the ordinary non-threatening developing move of 10. Bd2, Black should have take stock of his position in terms of the pawn structure, and then he would have found the right plan.

Conclusion: Black had the better game because he had better levers, but let White off the hook.”