Happy New Year to all chess players everywhere! After all, this blog and the great game of chess - is internationally loved.

Attention all LCCC'ers! Please try and make the 2016 Michigan Class Championship - held in Lansing, Michigan at the Radisson Hotel on January 16 and 17, 2016. 5 rounds of great chess action.

In other words - something for everyone, no matter what your playing strength is.

Please go to the Michigan Chess Calendar link on this site, move to the January 2016 page and click on this tournament's link for full information for the cost, the rounds, the time limits, the lodging options and all the other information you will need.

It's great fun to be at a tournament with all your other chess friends from the club.

When you register, be sure you tell the tournament director you are a member of the Livingston County Chess Club. The TD's will make every effort not to pair you with a member of our club. And there is a prize to the club who's top 4 players score the most points!

Hope to see you there!

And they say it is hard to find chess games. No it is not at LCCC!

Find the best move.
Posted by Nik Faldo at 1:38 PM No comments:

Merry Christmas to All the LCCC'ers - All Over the World!

Here is wishing everyone a great Christmas and a wonderful holiday time.

Our league - Week 6 - finished with the final game being played at Teekos Coffee Shop. An uneventful but positionally tough draw was the outcome between Ken T and Vince V.

On that concept of peace and harmony, here is a draw I played with the Black pieces. More fireworks than the Ken-Vince draw, but a lot more errors made by my opponent and me. Errors usually cause fireworks. Enjoy.

Draw agreed to.
Posted by Nik Faldo at 12:06 PM No comments:

Lets start with the league play:

The 49'ers continued their dominance over the rest of the league with a 2 - 0 win over the Flyers - and their 1st board did not even play yet! Ken T will play Vince V Monday but it won't affect the standings.

The Tigers defeated the Thunder 2.5 - .5 in the other match.

The standings and Round 7 pairings will be posted here soon, but the next round is not until January 11, 2016 - so there is no rush.

The star of the day is LCCC's Gene McClure who just played outstanding in the 2015 Michigan Action tournament. This "Action" tournament means that the games were played with a time limit of 30 minutes per player with a 5 second delay for each move. The 'delay' means that if you can make your next move in under 5 seconds, no time is taken off your 30 minute allotment.

This quicker time control leads to some very wild finishes and plenty of blunders. But it is a fun event. The faster time limit allows for more rounds with different opponents in a day and leads to upset!

Gene was gracious enough to annotate one of his wins from this tournament. And he acknowledged that getting 'battle hardened' at LCCC was part of the reason for his success in this tournament. But you still have to be "on" your game and Gene was this day.

The key position is after 34. b4, where he allows my Queen to attack.  I win a pawn at move 18, but he has compensation and Rybka says he equalizes.

A fine win by Gene M!
Gene scored 4 points out of a possible 6 and finished tied for 1st in his class and ahead of everyone in his 100 point rating bracket. Gene scored two wins over players rated much higher than himself.

We had five players on a foggy foggy night.

The Owls have a bye.

Now for a puzzle. Find the best move for White! 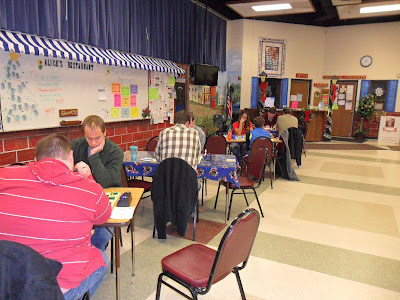 We had one match that could not be played due to work. Sometimes work gets in the way of life. I hate when that happens.
But we still had one match decided regardless.
The Thunder clinched a team win with a 2.5 - .5 victory over the Flyers. Congratulations to Luke S and Zack R on their wins. Gene M and Vince V agreed to a draw.

The match between the Tigers and the Owls has the Tigers up 1.5 - .5 as Sam T won and Nick D and Don J drew. The make up match on Thursday at Teekos between Tim R and Mike N will decide that one. Stay tuned.

Now here is a 10-minute game your humble scribe played on line with Black. We pick the game up at an even point.

A nice mix of casual chess, lessons and chess discussion. A nice night of friendly banter and chess on the first snowy Monday of the new chess season.

We welcome a new member to LCCC tonight......Steve P. Steve mentioned he has been away from chess for a while. Well, he has found the right home at LCCC.

Next week is league play. The schedule is posted on the previous post. Be sure to stop by to watch some great league action - or play some of the LCCC regulars who are not in the league. Either way, its a great night of chess.

Now a treat for my readers - another game by Boris Spassky. Here is plays White against the East German Champion - Lothar Zinn in the Student Olympiade in 1961. Notes by Anthony Soltis.... way before computers. [Notes by Igor3000 and your humble scribe]


For everyone and anyone who thinks league night is just for league players, well you could not be more wrong. We had two members available for games while the league went on, and even some chess after the league games.

Plus, watching the league action is always entertaining.

We had our first league night where all the combatants made it to the league night and this round was completed.

Now for the Match results:

The league leading 49’ers won again, beating the Tigers 2 – 1. This gives the 49’ers a BIG lead already in the league race. 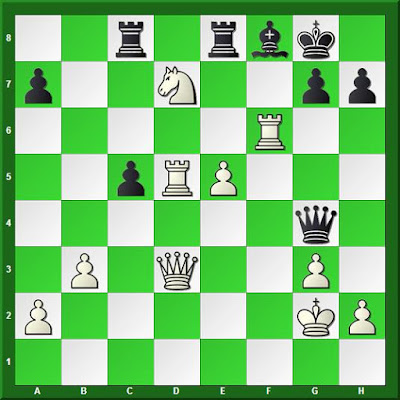 There is one really really good move for White!


It was a fun night of chess. Some casual chess, some lessons, a in depth review of some unusual options in the French Defense and some friendly chat. A good evening

One league game was left to be played – and it was. Congratulations to Dan W on his win.

This gave the Flyers a 2 – 1 win over the Tigers. Here are the standing – but keep in mind - some teams have not played every round and some have not had their bye week yet.

The matches for next week are:

It will be another exciting night of chess action. Come on by and watch or play a casual game against others either not in the league or have the bye week.

And now, another tough puzzle:

Any Chess Game is an Event to Cherish 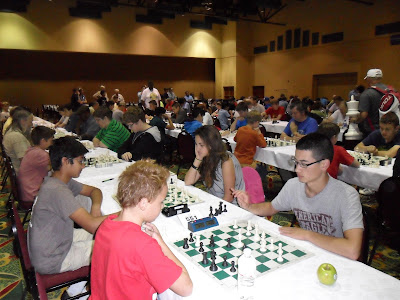 As you sit to play a chess game, you extend your hand to your opponent. But this handshake is more than a greeting. It is an acknowledgement from both of you - of a thank you to the chess gods - for this opportunity to create something artistic - from these figures of wood or plastic - on sixty-four squares of canvas.

The clock is started. It is a subtle reminder to all of us that we have only so much time, and we must use it wisely.

The game begins when the Leader of the White army’s hand reaches forward and unites a single member under his command and advances him towards the enemy.

This soldier is placed into position - really not by the hands of the player - but by his mind.  The mind which must stay focused on the target of the opposing King, but must weigh the risk to his own safety at the same time.

Tempo is everything; perfection unobtainable. There is always a slight nod, a tiny shake of the head, or a rubbing of the forehead by all players. This is an acknowledgement to the chess gods is we - as mere players of this game - are fallible.

And now the battle is on with advantage usually shifting back and forth, pulled by the powers in heaven and even the powers from inside the earth

The chessmen are alive. This chess game is a living sculpture with a unique characteristic – all its own.

A tuning fork goes off in your heart and your mind. It is such a pure feeling when that well-conceived strategy we developed all alone is somehow going undetected by our always worthy and noble adversary. That feeling is the reason the game keeps us in it's grasp.

Now to the conclusion of the game. It is usually sudden, and is always emotional at some level.  The finish is sometimes due to a player temporarily granted a tiny bit of the the creativeness of Morphy, the positional strength of Browne, the tactics of Tal, the mental brawn of Petrosian, or the pure genius of Fischer.

But usually it is due to the fact that someone has strayed a little too far away from the unattainable….and can no longer achieve the ultimate goal of victory.

Win, lose or draw, we once again extend our hand. This time it is a warm thank you to the person who granted you the honor of the opportunity to create a unique work of art.  And one that will never -  ever - be re-created exactly the same way again.