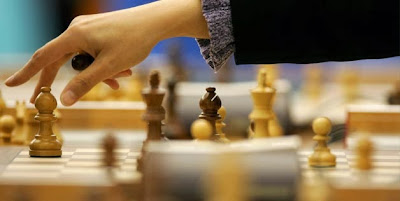 We had a great crowd of seventeen fun people at the club on Monday. We welcomed new player Joshua T also. Great to see you here!


Some ladder games were played also. Mike N held off a challenge and his other game was postponed until later.


Now for the tournament news for next week:


Get to the club at on November 4!

We are holding a Chess 960 or if you prefer - a Fischer Random Chess tournament!
It's free - so just bring your set, club spirit, your sense of adventure - and a sense of humor.

It will be a Swiss System tourney - 4 rounds - 2 rounds a night, and played on two Mondays - the 4th and will finish on the 11th.
Maybe the tie breaks will be on the 25th. Who knows?

Fischer Random or Chess 960 is where the back row chess pieces start on different squares than their usual location! So it can lead to some crazy games and positions.
But here is your chance to try it out. It's fun!

The chess position you will start at will be drawn after you and your opponent have sat down at your assigned board.

We will play two 30 minute games each night.
1st round will start at and the last round by , if not sooner.

We already have 20 players signed up, so get there at to get your spot in the tournament.

The winner will get his name on the blog as LCCC's 2013 960 Champion!
The Tournament Directors Mike and Ken T are looking forward to this fun event! Come on down to the club and play, especially if you are looking to get back into chess. This is a fun way to get back to the game.
Posted by Nik Faldo at 8:24 PM