﻿ The Feb 10 8th round finally finished the final “make up” game. Work schedules, health issues and weather delayed some games. But sportsmanship prevailed and people waited until their opponents could play the game without distraction – rather than take a forfeit win.

The League leading Rabid Squirrels lost their first match of the year to the hard – charging 49’ers.
This closed the gap to the Squirrels in the standings to 3 points (teams get 2 points for a won match) with 3 rounds to go! It also bunched the rest of the league together.
That leaves the Flames as the only undefeated team. They have SEVEN drawn matches, but no losses.
Here are the standings:
Rabid Squirrels – 12 points
Flames – 9 points
Tigers – 8 points
Sonics – 8 points
49’ers – 8 points
Thunder – 3 points
It is safe to assume that the entire rest of the league will be rooting for the Thunder next week when they play the Squirrels! Can a thunderbolt shake a squirrel off the top branch? We shall see.
The Flames play the Sonics and the Tigers have the 49’ers. Very exciting stuff.
Be at LCCC next Monday - March 10 - for the exciting chess league action.
Meanwhile, LCCC welcomed a new member Ted G tonight. He got some chess lessons in with Mike N. and a game or two in with Zack R. Welcome Ted.
Club Treasurer Vince V also was giving instruction to LCCC’s youngest members - Layla W and Rachel P. Good job Vince!
There were quite a few casual games going on also.
But what was that they were playing over there on Table 4? 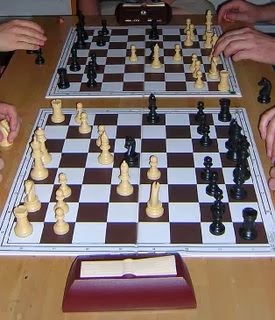 It’s called BUGHOUSE CHESS!
This is a chess variant where two players play as a team against two other players on two boards at once. Normal chess rules apply with each side has a player playing white and black. Except, the captured pieces on one board are passed to your teammate on the other board! And then the teammate has the option of putting this piece on his board.
This game is usually played in a fast time limit with a clock used for each board – usually 15 minutes or less – but I’m sure any agreed to time limit is fine. Clocks are placed on the outside so all players can see all clock readings.
Also, the touch move rule is usually not used in Bughouse, but clock move is. When you hit your clock button, then your move is final.
Partners are allowed to talk, suggest moves, ask for certain pieces or instruct to hold certain pieces, and even to delay moving, but they cannot make moves themselves on the other board.
The usual suspects were involved in this event; Aaron J, Scott M, Tim R, Ken T and Luke S. It looked like they had fun giving this spin on the old game a try.
Hope to see you Thursday at Teekos or back at the on Monday March 10 for League Night!
Posted by Nik Faldo at 7:34 PM