We had a nice night of chess at LCCC. Eight players including two new members. More on that in a later post.

But now to finish the Reverse Analysis article from last week by Jonathan Kolkey from Chess Life - October 2003: [Igor3000 notes in brackets]

Initially I was introduced to this classic encounter back in 1964 [ Jose R. Capablanca (2664) vs Alexander Alekhine (2547) - 21st Match Game, 1927], and it has taken me nearly 40 years to understand what actually happened. Annotations furnished by Lasker and Alekhine himself, among others, unfortunately shed little light on this astonishing game. Here, the defending world champion - playing White - was soundly beaten in 32 moves in a supposedly drawish Queen's Gambit Declined (QGD), without committing any obvious blunders.

Granted, critics suggest improvements here or there. But an amateur like us would remain mystified. However, examine in hindsight the critical position after White's 26th move, and the entire contest becomes crystal clear. 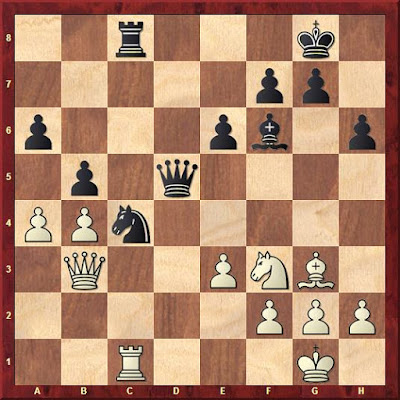 Here we are at the critical juncture. Black's soon to be decisive advantage consists of several elements:
A clearly more aggessively situated knight, bishop and queen - along with enjoying the luxury of having an escape square for the king to avoid annoying back-rank mates.

For starters, what is White's bishop doing stuck on g3 with no scope on current events? Reverse analysis shows that Capablanca used 3 moves to maneuver his piece into this wilderness.

Usually in the QGD opening, White trades this bishop for Black's on e7 or for the knight on f6. Capablanca did neither. This partially reveals some of the problem here.

In addition, White wasted 4 moves Bc4-e2-f3-xd5 to eliminate Black's same white squared bishop and now has a difficult time removing Black's monster knight on c4. And the absence of that same bishop leaves White with no easy way to pester Black's powerful queen on d5.

So Reverse Analysis shows that Capablanca's mishandling of both of his bishops cost him the game. [The proper knight move on move 22 would have equalized the incorrect handling of the White bishops - not withstanding.]

Regrettably, the normal move-by-move annotation style obscures these deeper, strategic currents that operate throughout an entire game. Once we conduct the appropriate reverse analysis post-mortem, then we can see things in a fresh light.
In my opinion, Reverse Analysis helps amateur players identify patterns, move sequences as well as deeper positional currents that normally remain obscured with traditional start-to-finish annotation. - J. Kolkey
Posted by Nik Faldo at 2:23 PM