LCCC Joins the United States Chess Federation! And a Fine Win for an LCCC’er.

The Livingston County Chess Club is now an Affiliate of the United States Chess Federation (USCF). We are now listed on their nation wide “club” list.
Our website will display that fact.

As will our business cards, letter head, corporate offices and corporate jet……as soon as we get them.

Here is an easy win for Jason (mycroft)

7. Re1+ Be7 8. c3
[This is how you typically exploit moves like 6. .. c5.  The logic goes like this: c5 was meant to protect d4, and if black plays dxc3 he invalidates the time he spent on c5 AND he accelerates my development. Meanwhile, I'm threatening to blow up his center with cxd4.] 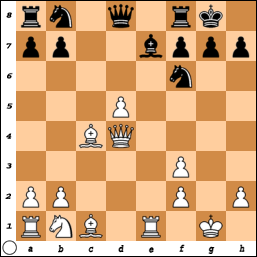 11. ….. h6?
[More time wasting. He should finish his development with Nc6.]
Ed. Note: This is a speed game. Black has no game plan and doesn’t want to waste time to think of one. So he opts for a “safe” move that actually weakens the wall in front of his king.

12. Nc3 a6?
[Most likely lost at this point. Still Nc6 is OK. Too much wasted time. Now white's attack comes fast.]
Ed. Note: If you have no plan in a speed game, an “attack” or “development” move if preferable to a “safe” move. At least give your opponent SOMETHING to chew on.

[He needed to leave the Be7 to guard f6. Losing move according to Rybka.]
Ed. Note: Well, Black has designs on h2 by getting his queen to h5. But he never gets the opportunity.

[A bad move in a bad position. 14. .. g6 was the only try. Now white's attack crashes through on the dark squares.]
Ed. Note: Four bad moves in a row is enough to crush Kasparov or Fischer, let alone Elmo the Great! Elmo just wasted TIME (tempos) on the chess board to save TIME on the clock.