Venture Out to the LCCC Chess Club 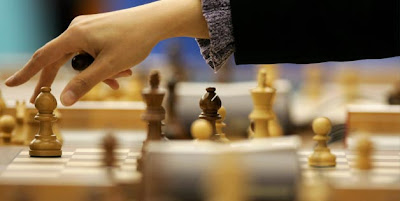 You may be chess royalty when it comes to playing against your friends but how about facing down a grizzled stranger hungry for battle? That’s right I’m talking about people that will meet your every threat with brow-furrowing calculation to see if they should even bother defending.

At your local club you will find players at every strength level. Don’t be intimidated! All chess players can only move one piece at a time. It just seems like the better player’s pieces are moving faster and stronger.

Here is a list of things you want to do before trying to take your game to the next level:

Know the opening that you want to play: To have success look at lines that the great players have played. Your opening has to do something positive, control the center with either pieces or pawns. You don’t need to know every line twenty moves deep but get a feel for the positions that emerge out of the opening.

You’ll eventually have to decide what to do over the board and it can be tricky if you’re unprepared. I suggest learning a system where move order doesn’t matter like The Colle System. It’s a club favorite all over the world because it gives you a good game where you can start playing without much preparation.

For black you’ll need to know one defense to e4 an d4. Other openings are rare enough so you don’t have to worry about them just yet.

When in doubt don’t reinvent the wheel: If something feels wrong it probably is. Even after playing a few games you develop instincts about what works and what doesn’t. If your opponent has all his pieces developed and you’re trying to conduct an attack with only two it’s bound to be refuted right? If you weaken the pawns around your king early that will lead to difficulties later. Sometimes all it takes to end up on top is a bit of patience.

Be humble: Don’t expect to win all of your games. Chess is a game of pure skill without any of the forgiveness of games in which luck is a factor. A better player will stomp you over and over until you want to fold up your board and hit the road.
However, when you do crack their vaunted defense or stop one of their attacks cold not only do you win a chess game but you get vindication as well!

If you lose don’t forget to ask one of them to help you with your post-mortem analysis. Chess players are lifelong learners and many of them get as much of a thrill out of sharing information they do out of absorbing it. The players at LCCC
always will help another player out.

That is how we roll at LCCC! See you on Monday!
Posted by Nik Faldo at 8:40 PM