Meet GM Fabiano Caruana - The Best Player in the USA 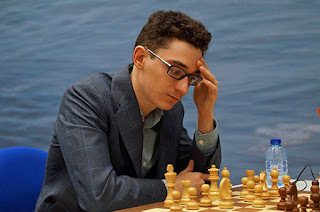 Such is the life of a chess superstar who played for the World Chess Championship in 2018 and lost only in a rapid chess tie-break against the greatest player ever to have played - Magnus Carlsen of Norway.

No, his name does not roll off an American tongue like "Bobby Fischer", but Fabiano's performance against Carlsen proves that he plays better than Fischer (see the computer analysis of chess strength in the Paul Morphy post on Aug. 20, 2020). And like Fischer, Fabiano was born in the USA. Miami, Florida to be exact in 1994.

His chess rise was nothing short of meteoric! After his family moved to New York in 1996, little "Fabi" found the chess environment and training he needed.

2004 - His family moves to Madrid, Spain and he turns professional at age 11!

2005 - Changes his chess Federation to Italy

2007 - Moves to Budapest, Hungary to train with GM Alexander Chernin. Becomes a Grandmaster at age 14

2012 - Moves back to Madrid. Wins the major chess tournaments; Reykjavik, Dortmund, and second at Wijk aan Zee and Sao Paulo/Bilbao

2016 - Wins US Championship, leads the USA Team to a gold medal at the Chess Olympiad in Baku. Second at Wijk ann Zee and Moscow

The USA has one of the strongest chess teams in the world and very few in the country are aware of it.

Fabiano Caruana is the 1st board!